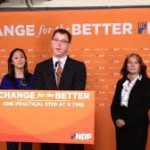 Clark ran the most right-wing, Republican-style campaign Canada has ever seen.

Last night’s victory by Premier Christy Clark and the BC Liberals will go down in British Columbia political history as one of the biggest upset victories ever. Unfortunately, it will also go into the books as a triumph of fear over hope, of choosing incredibly negative, personal attack ads over policy and vision, and a revolting example that using taxpayer dollars to advertise your own party cause works.

END_OF_DOCUMENT_TOKEN_TO_BE_REPLACED

Premier brought in HST despite Liberals' promise. Now she promises to protect the sensitive BC coast from oil pipelines and tankers.

"We've got tankers going up and down the St. Lawrence for heaven's sake. I don't know why we'd ban them necessarily off the west coast."
– Christy Clark, Feb 24, 2011.

If you liked how the BC Liberals betrayed voters by imposing the Harmonized Sales Tax (HST) after the 2009 provincial election, you'll love what they will probably do with bitumen oil pipelines if they win again in 2013!

END_OF_DOCUMENT_TOKEN_TO_BE_REPLACED 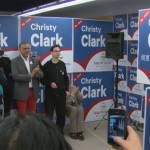 The party that brought BC the HST after pledging not to, now promises to stop Northern Gateway pipline.

"We've got tankers going up and down the St. Lawrence for heaven's sake. I don't know why we'd ban them necessarily off the west coast."
– Christy Clark, February 24, 2011.

If you liked how the BC Liberals betrayed voters by imposing the Harmonized Sales Tax (HST) after the 2009 provincial election, you'll love what they will probably do with bitumen oil pipelines if they win again in 2013!

END_OF_DOCUMENT_TOKEN_TO_BE_REPLACED

Premier misquotes credit rating agencies in attempt to bolster her own financial credibility.

If you believe Premier Christy Clark, BC's budget is not only balanced — it's actually been verified by international credit rating agencies. And thanks to Clark's BC Jobs Plan, this province apparently leads the country in job creation. But the facts simply contradict the premier.

During this election Clark has been trying to sell more Whoppers than Burger King.

END_OF_DOCUMENT_TOKEN_TO_BE_REPLACED 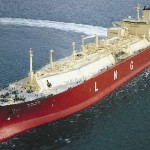 Come on British Columbia! Premier Christy Clark's Magical Mystery Campaign Tour is dying to take you away! Just drop a big hit of this free LNG and it will be a psychedelic, far out, groovy good trip — satisfaction guaranteed!?

END_OF_DOCUMENT_TOKEN_TO_BE_REPLACED

Clark's attempts to appeal to all sectors make some question her sincerity.

How do we dislike BC Premier Christy Clark? Let me count the ways. Because with a 65 percent personal disapproval rating in a poll last month, a 20 percent gap behind the front running New Democrats and only 16 percent saying she would make the best premier after two years on the job, Clark is obviously not Miss Congeniality to British Columbians.

END_OF_DOCUMENT_TOKEN_TO_BE_REPLACED

New Democrat leader Adrian Dix is taking the biggest political risk of his life — and his party will win or lose this election because of it.

No, it's not by promising well in advance that an NDP government would increase the corporate tax rates or put a minimum tax on banks and financial institutions nor is it an ill-advised policy in the party's forthcoming platform.

Dix rolled the dice a year ago when he publicly pledged the NDP will not run negative or personal attack ads, period. The NDP has not and will not respond in kind to the vicious $1 million assault on Dix's own character launched by Concerned Citizens for BC, a BC Liberal-linked group led by Jim Shepard, an ex-Christy Clark advisor and former corporate CEO.

END_OF_DOCUMENT_TOKEN_TO_BE_REPLACED 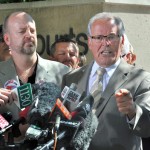 Fight HST won the referendum — and the Liberals lost the public's trust.

"If Premier Gordon Campbell and the BC Liberal MLAs don't listen to the people and drop the HST, he and his party are finished."
– Former BC premier Bill Vander Zalm, April 1, 2010.

Three years to the day of that warning from Fight HST leader Bill Vander Zalm, the harmonized sales tax is finished, Gordon Campbell is finished and in six weeks most BC Liberal MLAs will be finished.

END_OF_DOCUMENT_TOKEN_TO_BE_REPLACED 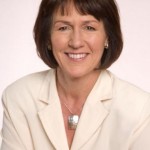 "Twitter is a great place to tell the world what you're thinking before you've had a chance to think about it."
Chris Pirillo, blogger

Apparently, Canada is doomed — unless one of two things happens, depending on which Twitter feed you follow: