People expect too much from products with an SPF higher than 50.

Theoretically, applying sunscreen with a sun protection factor — SPF — of 100 would allow beachgoers to bare their skin 100 times longer before the sun burns it. Someone who would normally redden after 30 minutes in the midday sun could stay out for 50 hours.

But for high-SPF sunscreens, theory and reality are two two different things. Many studies have found that people are misled by the claims on high-SPF sunscreen bottles. They are more likely to use high SPF products improperly and as a result may expose themselves to more harmful ultraviolet radiation than people relying on products with lower SPF.

END_OF_DOCUMENT_TOKEN_TO_BE_REPLACED

Canada will now have an unprecedented level of media concentration.

from a news release

PIAC, which acted as counsel for the Consumers’ Association of Canada (CAC), the Council of Senior Citizens’ Organization of British Columbia (COSCO), the National Pensioners and Senior Citizens Federation (NPSCF), and Option consommateurs appeared before the Commission in May opposing Bell's second application to take over Astral Media. PIAC argued that the transaction would create an unprecedented level of media concentration and vertical integration in Canada and weaken competition in broadcasting services, resulting in increased costs for television programming to consumers. At the hearing, PIAC argued that Canadian consumers are frustrated with the lack of choice and flexibility and continued price increases for television services and asked the Commission to deny the application.

The Commission in its decision acknowledged that the transaction would lead to significant concentration in the Canadian broadcasting system.

"Canada will now have an unprecedented level of media concentration and vertical integration and a weaker diversity of voices with the loss of Astral, a strong independent broadcaster," said Janet Lo, Legal Counsel for PIAC. "Consumers should brace themselves for less competition for television services ­ and consumers will not only pay the price but they will face less choice and flexibility in the market."

PIAC expressed reservations about the effectiveness of safeguards imposed on transaction, such as embedding portions of the Vertical Integration Code of Conduct as Conditions of Licence and requiring dispute resolution if affiliation agreements are not reached before the expiry of an existing agreement. PIAC, however, was somewhat encouraged by the requirement on BCE to file all affiliation agreements with the Commission.

"These mechanisms are less than ideal safeguards to protect Canadian broadcasting consumers and consumers are left to trust the Commission to closely monitor BCE to flag and penalize anti-competitive behaviour," said Lo. "The best protection for consumers is vigorous competition in an unconcentrated market by many competitors, including strong independent players, who can deliver the innovation in pricing and packaging that consumers expect."

PIAC is a member of the Stop the Takeover Coalition, a broad-based coalition of public interest groups opposing the transaction. 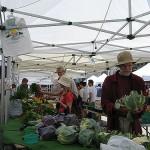 from the Organic Consumers Association

FINLAND, MN, June 27, 2013 — The Organic Consumers Association (OCA) today announced results of its search for the top Right to Know Grocers in North America. The winning food retailers were selected from more than 150 consumer nominations. The OCA named 12 overall winners – the “Diligent Dozen” — and 10 winners each in five regions: Northeast, Northwest, Central, Southeast and Southwest.
END_OF_DOCUMENT_TOKEN_TO_BE_REPLACED

from the Public Interest Advocacy Centre

END_OF_DOCUMENT_TOKEN_TO_BE_REPLACED

Consumers will lose more ground in the cellphone market unless the Industry Minister or the Competition Bureau stops the proposed acquisition of Mobilicity by TELUS, the Public Interest Advocacy Centre (PIAC) and the Consumers’ Association of Canada (CAC) said today. Mobilicity, Canada’s second-largest “new entrant” wireless company, will be absorbed by TELUS, Canada’s second-largest cellphone company, if the agreement announced today is approved by the federal government and the Competition Bureau.

“Losing Mobilicity to TELUS means we are that much closer to the big three being the only three wireless companies in Canada,” said John Lawford, Executive Director and General Counsel for PIAC.

TELUS must seek permission from the federal government to purchase Mobilicity, a “new entrant,” within five years from the last spectrum auction. The federal auction rules prohibit major cellphone companies like TELUS, Rogers and Bell Canada from buying new entrants or their spectrum until February 2014.

“We call once again for the Minister to clearly tell the major wireless companies that they cannot reduce consumer choice by buying up their competition” said Bruce Cran, President of the Consumers’ Association of Canada.

Lawford noted that wireless is already on the ropes, with WIND Mobile and Public Mobile, two other “new entrants,” now are also threatening to sell to the major competition: “Sadly, the wheels are coming off the Industry Minister’s four competitor model.”

Canada's credit unions were disappointed to see the March 21 federal budget increases taxes for credit unions and caisses populaires in 2013 and in future years.  A tax provision designed to help credit unions compete with big banks will be eliminated.

END_OF_DOCUMENT_TOKEN_TO_BE_REPLACED 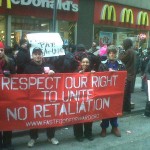 WASHINGTON DC, May 8, 2013 — This Mother's Day a broad coalition of moms from prominent bloggers to a bestselling author are puttin McDonald's marketing to children under intense scrutiny and calling on the burger giant's CEO, Don Thompson, to give moms a break.

Today, two weeks prior to the corporation's annual shareholders' meeting, moms took to the blogosphere, Twitter, Facebook, Pinterest and other social media sites to promote the #MomsNotLovinIt campaign and an accompanying graphic: a mother with her kids standing down a tidal wave of McDonald's promotions.

END_OF_DOCUMENT_TOKEN_TO_BE_REPLACED

Thirteen ways to choose foods for personal health as well as agricultural sustainability.

Here are 13 ways to continue to celebrate Earth Day through the week and through the year. Sustainable food and agriculture systems can play a big role in preserving the environment by helping to improve soil health, protecting biodiversity, and mitigating climate change. Earth Day is a great opportunity for eaters, farmers, and food businesses to make changes in their diets, shopping habits, and production practices that will promote sustainable, healthy food throughout the year.

Agriculture contributes to some 30 percent of global greenhouse gas emissions. And the environmental damage brought on by the agricultural sector poses significant threats to the industry itself.   But there’s a better way to produce — and eat — food.

END_OF_DOCUMENT_TOKEN_TO_BE_REPLACED

The Consumerist's annual "worst of" competition is down to the wire. Will Electronics Arts win an unprecedented second Golden Poo Award? Watch and see. Consumerist is a hip, somewhat irreverent online publication from Consumer Reports.

Environmentalists aren't much better.  They ignore repair, speaking only of “Three R’s” (reduce, reuse, recycle) in the limited context of household waste such as containers, cardboard and kitchen scraps. This perpetuates the myth that reducing waste means a poorer lifestyle — buying less, getting your clothes from the second-hand store, and spending your time flattening tin cans.

In truth, the “Four R's” should be viewed as the economy’s main engine of jobs and productivity, and the environment’s saving grace.