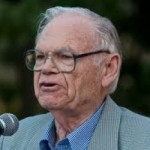 If Murray Thomson wasn’t a pacifist you might call him a happy warrior. The moving force behind many worthy peace endeavours, he will soon turn 90.

END_OF_DOCUMENT_TOKEN_TO_BE_REPLACED

The Catholic aid agency Development and Peace (D and P) is in turmoil after the Canadian Conference of Catholic Bishops (CCCB) pressured the organization in  September to scuttle an educational post card campaign just as D and P was about to distribute the material. The postcards, which were to be sent to the Prime Minister, asked that he have a parliamentary committee undertake a national consultation on the future of Canadian development assistance.

END_OF_DOCUMENT_TOKEN_TO_BE_REPLACED

Cutting child poverty, one paper doll at a time.

I’ve been making dolls for more than 60 years, but I’ve never made them with such purpose as now. Nor have I made them with such fervent prayer, nor in the company of so many people. These dolls represent 70,000 Alberta children living in poverty. They are part of the ongoing push by the Child Wellbeing Initiative (CWBI) to raise awareness about this emergency situation. This is the passion of Alberta women in the United Church.

In 2010, the CWBI inspired people around the province to help with the poverty doll project. We began by making a rag doll for each of our 83 members of the legislative assembly.

It was interesting to be in the visitors’ gallery to see the surprise on the faces of the MLAs as they entered the house and found a doll sitting on their desks. Attached to each was a card with the question Jesus posed: “If a child asks for bread, who would give a child a stone?” The card also contained the five things we want for the 70,000 Alberta children who live in poverty: school breakfast and lunch programs, more affordable daycare and housing, higher minimum wage and a provincial poverty-elimination strategy.

On November 20, National Child Day, dozens of us will return to the legislature. We’re taking each MLA a pin, handmade by Sharon Prenevost of Lethbridge. Each bears a picture of the rag doll and reads “End Child Poverty.”

On November 20, National Child Day, dozens of us will return to the legislature.

We’ll hear MLA David Swann address the house on the problems that poverty presents to children (such as a poor standard of health, the risk of failure and school dropout), and how society is in turn impoverished by this situation. We’ll speak at a press conference and display the paper dolls. Hopefully, an 11-year-old will read her award-winning poem about poverty.

Throughout Alberta and Northwest Conference, people are cutting paper dolls. We even have helpers in Yellowknife and Fort St. John, BC. Our goal is to cut a doll for each child in poverty. Usually when I mention this goal, someone says, “Wow, 70,000 dolls is a lot!” That’s the point. It’s a lot of kids. And that’s just Alberta. In Canada, one in 10 children lives in poverty. Even UNICEF has turned its attention to child poverty in Canada.

Some people like to tell how they “pulled themselves up by their bootstraps.” They say that it’s the parents’ responsibility to raise their kids. Yes. But when ill health, addiction or family violence means that children suffer, do we stand by? Charity is not enough, and poverty is never the child’s fault.

Our government officials say they are working on the problem; I believe them. But they need to work harder. At my downtown Calgary church, homeless people are given a cot to sleep on in the gym once a month at the city-wide Inn from the Cold program. In July, of the 21 guests in our gym, eight were children.

We must make the well-being of children a priority. None of us would sit down at dinner this Sunday and expect children to watch the adults eat most of the food.

Nelson Mandela said, “There can be no keener revelation of a society’s soul than the way in which it treats its children.” I add an Amen and reach for my scissors.

END_OF_DOCUMENT_TOKEN_TO_BE_REPLACED 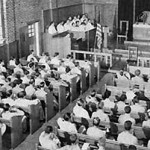 Public Safety Minister Vic Toews decided recently to cancel the contracts of all 49 part-time chaplains in Canada’s federal prisons. Eighteen of those chaplains are non-Christians. Another 80 full-time chaplains remain; 79 of them are Christians. That leaves only one non-Christian chaplain, an imam, in the entire federal prison system. The public reaction, at least as expressed in the media, has been almost entirely opposed. Even the Conservative-friendly Calgary Herald was mildly negative.

Toews may (or not) care about negative public comment — he has had plenty of that in the past few years. But he has also won five federal elections in a socially and religiously conservative area of Manitoba and he knows well how to play to his political base. He also speaks in a code that they understand and he is doing that in the narrative of dissed prison chaplains.

END_OF_DOCUMENT_TOKEN_TO_BE_REPLACED

Freedom of conscience is the key.

During the recent federal election campaign the Conservative Party announced that, upon winning, it would create an office in the Department of Foreign Affairs and International Trade to advance religious freedom around the world.