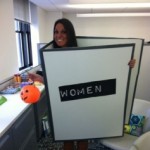 Romney gave us a glimpse into the chummy men's club that runs the world.

One of the least scary things about Mitt Romney is that, when he was trying to figure out who to appoint to his cabinet in Massachusetts, he ordered up “binders full of women.”

So the rumpus over his remark in last week’s US presidential debate seems odd. After all, as MSNBC host Chris Hayes noted, what Romney did amounted to affirmative action (even if he had to be goaded to do it by a women’s coalition).

Still, the fact that a leading businessman and politician couldn’t think of a single qualified woman inevitably raises questions: did he know any working women, and if so, did he consider them all deficient? Romney inadvertently gave us a glimpse into the chummy men’s club that runs the world and helped us see why so few women ever penetrate it.

The truth is that systemic discrimination against women is alive and well, even if a chattering class of women are now successful.

This is perhaps no surprise, except that there’s been some spin lately to the contrary, suggesting that the world has recently blossomed into a matriarchy, as celebrated by the media buzz over Hanna Rosin’s book The End of Men And the Rise of Women.

True, gender roles have been shaken up in recent decades. Women are stepping up to the plate as breadwinners. They are more assertive, less willing to be designated as the note-taker at meetings and the one sent out for coffee.

It’s also hard to imagine the 1970 blockbuster novel Love Story catching on today, with its lame tale about a young woman who willingly gives up a promising career so she can be home to make dinner for a guy who doesn’t even bother to say he’s sorry.

Women are also smoking more today, playing in football leagues (albeit in lingerie) and breaking through the long-standing gender barrier against women committing mass murder. (Rosin tells the story of a female neuroscientist who murdered three colleagues when her career ambitions were thwarted.)

It’s also true that some individual women are enjoying a lot of success today, although it would be a mistake to conclude that working women overall are advancing.

In accepting the Oscar for best actress in 2002, a breathless Halle Berry insisted that "tonight the door has been opened… every woman of colour now has a chance!” Halle’s victory certainly allowed her to demand higher pay for her films and her modelling contract with Revlon. But it’s hard to see how it did much for millions of struggling women of colour who lack her attributes, which include making it onto Men’s Health magazine’s list of the Hottest Women of All Time.

The truth is that systemic discrimination against women is alive and well, even if a chattering class of successful women look around these days and see that life is good.

For ordinary women, who have no hope of making it into Mitt’s binder or onto the Men’s Health all-time chart, the last 20 years have been tough.

The Harper government has been particularly aggressive in blocking equal pay, stripping women in the public service of pay equity coverage.

The rise of feminism led to some early progress. Canadian women went from earning 64 percent of what men earned in the 1960s to 72 percent by the early 1990s. But the pay gap has been stuck there ever since, even as women have broken new ground on the smoking and murder fronts.

Indeed, there’s been an aggressive pushback from the male-dominated elite. After the Trudeau government passed some limited pay equity legislation in 1977, both Liberal and Conservative governments put up fierce resistance in court against women trying to enforce their legal rights.

It was only last fall that women clerical workers at Canada Post won an equal pay settlement — after a 28-year battle.

The Harper government has been particularly aggressive in blocking equal pay, stripping women in the public service of pay equity coverage.

Perhaps that’s not surprising, given the clubby old boys’ network in the Harper cabinet, which is notably thin on women.

Is it really possible that there aren’t more women in the Conservative caucus who are at least as impressive as Vic Toews, Tony Clement, John Baird, Peter Kent, Jason Kenney and others in Harper’s binder full of men?