The Harper government likes to remind Canadians that we’ve done better than most developed nations in bouncing back from the global economic crisis. But digging into the data shows why many people might be having trouble cheering this news: wages have not kept pace with inflation, and new hires are making 40 percent less than the average worker.

Tiff Macklem, senior deputy governor of the Bank of Canada, recently brought home the official storyline: The level of employment is now higher than it was before the crisis; jobs are mostly being created in the private sector, most are full-time and are emerging in industries that pay above-average wages.

These are upbeat metrics, but they are irrelevant to the one thing that matters most to Canadian households and a sustained, broad-based recovery: how much people get paid.

Data reveal that purchasing power is falling for most Canadians since the recovery began.

On that count, the data reveal that purchasing power is falling for most Canadians since the recovery began. The average wage paid to Canadians has not kept up with inflation. Real average wages declined by 0.6 percent between 2009 — the trough of the recession — and 2011, from $23.11 to $22.99.

Thirteen cents difference may not sound like much, but that’s because the bottom half of the wage distribution losing ground faster than the top half. See the attached chart. (Data are from the Labour Force Survey public use microdata file) 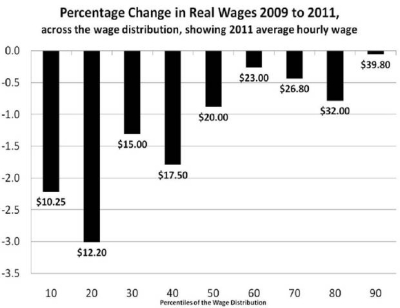 It is true that there are 820,000 more jobs now than in the middle of the Great Recession, but there are still 1.4 million people looking for work — a number that is about 25 percent higher than before the crisis started, and not steadily declining.

Given this mass of joblessness, the appropriate comparison is not the number of jobs there are, but the number of jobs there could be if the economy was functioning at its potential. The Parliamentary Budget Office has calculated that Canada’s economy would have 130,000 more jobs if it were operating at capacity. Instead, Ottawa and some provinces are about to slow the economy further, as austerity policies start to kick in.

The Government of Canada is hammering down on this story: We have more jobs than we did before, and most of the new growth is in high paying industries. It’s left to the imagination that Canadians have never done better.

Simple math challenges this narrative: if the majority of new jobs are appearing in industries that pay better than average, average wages should be going up, right? But they’re not. What’s up with that?

If the majority of new jobs are appearing in industries that pay better than average, average wages should be going up, right? But they’re not.

Don’t be fooled by job creation stats.  We ducked the “jobless recovery” of the 1990s, but welcome to the new normal, for far too many Canadians: the wageless recovery.

This article was first published at the Globe and Mail’s business feature, Economy Lab http://www.theglobeandmail.com/report-on-business/economy/economy-lab/welcome-to-canadas-wageless-recovery/article4852286/

Armine Yalnizyan (MIR 1985) is an economist who has focused on serving the community since her graduation from the Centre in 1985. After 10 years as program director with the Social Planning Council of Metropolitan Toronto, in 1998 she authored a ground-breaking report, The Growing Gap, about income inequality in Canada. Through this, and her many other publications (reports, articles and chapters in books) she has contributed to Canada's public discussion of social and economic equality. In 2002, Armine became the first recipient of the Atkinson Foundation Award for Economic Justice. She is a founding member of the Progressive Economics Forum; and a board member of the Public Interest Advocacy Centre.

2 Responses to “Welcome to the wageless recovery”