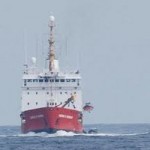 Is Canada on the wrong side in the dust-up between the US and Latin America over the future of the four-decades-old so-called war on drugs? In a late September meeting that didn’t get much press, the presidents of Guatemala, Colombia and Mexico, addressed the United Nations, calling for alternatives to the military assault on drug cartels that has done little to end the violence. Yet the US war on drugs continues.

And where does Canada stand on attempts to reframe the drug issue? The answer appears to be we’re getting deeper into the war by the year.

Few Canadians are aware of the 2010 policy shift that now allows Canadian ships to transport and support the US Coast Guard in the Caribbean as they attempt to catch drug smuggling craft on their way to US ports.

Only the armed American officers board vessels, hunt for drugs and detain alleged smugglers — but Canada’s backup role is increasingly important. The Royal Canadian Navy contributes ships, helicopters and an Aurora tracking plane, and provides data on suspicious vessels via surveillance tech back home.

Canada must sometimes make compromises to maintain the bilateral relationship with the US: expert.

“I know that warning shots are routinely fired by USCG ships. However, I do not know of any instance that a RCN warship has fired a warning shot ‘on behalf’ of US authority,” says former naval officer Ken Hansen, now a research fellow with Dalhousie’s Centre for Foreign Policy Studies.

According to him, the prevailing argument seems to be: “If we’re going to be part of a common security perimeter [with the US], we have to learn to understand their concerns even if they’re sometimes false.”

But Hansen is concerned about Canada’s potential “loss of sovereign authority,” given its participation in joint operations. “How does it affect our own national policies on security? How does it affect how we as Canadians approach problem solving, as opposed to the Americans?” he asks.

One logical place to ask questions about this topic is to approach officers and academics in and around the Royal Canadian Navy, who are conversant with drug politics.

Some wonder if the new armed coastal patrol vessels, featured in the navy’s multi-billion-dollar shopping list, aren’t part of a new orientation to the drug war.

Marc Imbault, a defence analyst in St Jean Quebec, agrees that the war on drugs is lower on the list of priorities for the Harper government than other items like Arctic security, countering Iran in the Gulf of Aden or piracy in the Persian Gulf. But he also notes that Canada must sometimes make compromises to maintain the bilateral relationship with the US.

Imbault says that Canada can be a “sea-power,” without sacrificing its history as an “honest-broker,” in the world.

All of this perhaps reflects the fact that, in the post-Afghan war hangover, our navy appears to be flexing its muscles in various missions with the US Navy, as happened off Libyan waters in 2011.

This has made some wonder if the new armed coastal patrol vessels, featured in the navy’s multi-billion-dollar shopping list, aren’t part of a new orientation to the drug war.

Philippe Lagassé, a U of Ottawa defence expert, thinks they could well be, since the new boats, in addition to their much-touted Arctic duties, will likely be sent to the Caribbean.  “The patrol ship is an odd [choice]. The problem lies with its capabilities. It’s not designed for year-round Arctic patrols.”

U of Alberta political scientist Julian Castro-Rea believes there’s insufficient debate in Canada about the way our military services buy exactly the same hardware the US is adopting, like the controversial F-35 stealth fighters.

“The Canadian Forces insist Canadian commanders will always be responsible for their forces,” he says, “But if you build your forces around operating your military with your neighbour’s, your forces in the end won’t be autonomous.”

Another question is whether it’s in anyone’s interest to spend unknown amounts of money on ocean-based interceptions now that land smuggling seems more common.

Another question is whether it’s in anyone’s interest to spend unknown amounts of money on ocean-based interceptions now that land smuggling seems more common. Sanho Tree, an analyst at the Washington-based Institute for Policy Studies, says high seas interdiction led years ago to the drug cartels’ transporting merchandise overland through Mexico and other Central American countries, creating upheaval, corruption and deaths.

Tree estimates that roughly ten to fifteen percent of the illegal drugs going across the Mexican-US border get seized beforehand in these interdiction efforts. Most of those caught on drug-smuggling craft by the US are the “expendable” small fry who don’t have a lot of info about their employers to share with the feds, he says. “The drug cartels expect to lose a certain amount [of merchandise] through interdiction. It’s the cost of doing business.”

The outgoing president of Mexico, Felipe Calderón, may have argued for a less “prohibitionist” strategy, but his military campaign against cartels – funded by the U.S. to the tune of $4 billion annually under the Mérida Initiative – is a human rights disaster. According to Amnesty International, 60,000 people have been killed in the crossfire.
So far, Amnesty International spokesperson Kathy Price says she has been seeking assurances from Ottawa that human rights considerations are taken into account in the assistance provide to Mexico.

“We know that Canada has a deepening relationship with Mexico, and security is one of the issues that we cooperate with Mexico. What we are asking for is that respect for human rights and the rule of law are at the core of every agreement or policy engagement with Mexico.”

Just last March, a quiet exchange of notes between Ottawa and Mexico City outlined plans for more defence-related discussions to deal with “criminal activities and other threats in the hemisphere.”

At the Department of Foreign Affairs, spokesperson Ian Trites explains that a portion of Canada’s $15 million annual investment in crime-fighting in the Americas has gone to “law enforcement training projects for Mexican police.” The goal, he says, is “to protect the rights of vulnerable groups in a manner consistent with international anti-crime and human rights obligations.”

But the Mexican born Castro-Rea at the University of Alberta counters that Canadian forces don’t have much interest in direct support for Mexico.

“These [discussions] are made at the insistence of the United States [where] the United States wants Canada to take Mexico seriously. And that is why Canada does it but otherwise, I don't think there would be any cooperation there.”

Also, Castro-Rea observes, Canada and Mexico do not normally collaborate militarily on their own initiative and he describes the training of Mexican police officers by Canadians as “token.”

Indeed, it is the US’s military’s southern command that separately co-ordinates Canadian and Mexican naval contributions to American led drug interdiction in the Caribbean, he continues.

“Most Canadians would be alarmed if [they knew] our military was adopting the US view that there is a military and police solution to drug trafficking.”

Nonetheless, for the Rideau Institute’s Steven Staples, these trilateral relations do not bode well. “Most Canadians would be alarmed if [they knew] our military was adopting the US view that there is a military and police solution to drug trafficking,” he says. “There is a real danger here. Canada and the US have very distinct views on the problem.”

Another ex-naval officer and the author of an upcoming book on Canada US military co-operation, Eric Lerhe, also argues that this exchange of notes between Ottawa and Mexico City remains significant.

“It is likely to develop into a proper cooperative relationship in my opinion if only because of our proximity and the Harper foreign policy focus on this hemisphere. What is particularly interesting is the change is probably more significant in Mexico than it is in Canada. Until 10 years ago their military had very few links with any other and their participation in international operations and peacekeeping was extremely limited.”

Mexican and Canadian naval units as well as their counterparts in the army and navy may engage in joint exercises and exchange information on a counter drugs strategy, continues Lerhe.

But he doubts that Canadian soldiers will be in Mexico anytime soon. “It would be too contentious [and] it would also probably be unacceptable to Mexico from a sovereignty point of view.”

Paul Weinberg lives in Toronto. He is a freelance writer and Canadian correspondent for Inter Press Services. He also writes for NOW Weekly.

2 Responses to “Canada joins the war on drugs”