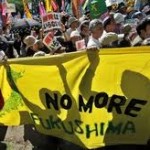 After 70 years, nuclear bombs remain the only real re-use for lethal waste.

Along with freak storms, nuclear reactor accidents have moved from being a 100 year event to being regular occurrences.  “The Nuclear Regulatory Commission’s probabilistic risk analysis claims a meltdown is a once in a 200 year event,” said nuclear engineer Arne Gundersen.  But the facts contradict the predictions. “There have been five meltdowns in 35 years: Three Mile Island, Chernobyl, and three meltdowns at Fukushima.”

Fukushima! As the people of Japan struggle with the consequences of the 2010 earthquakes and tsunami, the ongoing catastrophe at the Daichi nuclear power plants has turned Japanese public opinion solidly against starting up the remaining plants.

At the recent “Ending the Nuclear Era” conference, Akiko Yoshida of Friends of the Earth Japan reported what voters there said:  90 percent want all the nuclear power plants shut down immediately and permanently. She also reported that the nukes provide only about 14 percent of Japan’s energy supply, contrary to what most people believe.

Despite decades of warnings, a large section of an industrialized country is undergoing involuntary human experimentation with human-made radiation.

At this point, nothing will remove the radioactivity that blankets the Fukushima prefecture [province] in the shadow of the radioactive plume from the three ruined plants, which are still far from stable. Meanwhile, hundreds of thousands of people live in areas with outrageously high levels of radiation, mainly Cesium 135. A recent medical study found nodules or pustules on the thyroids of one-third of children in the area, yet “the Fukushima government denies any danger,”

“There is no safe dose of radiation,” said Dr Jeff Patterson, president elect of Physicians for Social Responsibility. Even with very low doses of radiation, repeated studies have found a direct linear dose relationship between exposure to radiation, and cancer, he said.  Despite decades of warnings, a large section of an industrialized country is undergoing involuntary human experimentation with human-made radiation – with very little information reaching the public in other parts of the world.

Incredibly, here in North America, business leaders still hail a Nuclear Renaissance, packaging nukes as green alternatives to aging coal plants. Of course, the industry also maintains that the peaceful atom is an entirely different industry from the atomic weapons industry, despite all the evidence to the contrary.

All of the enriched uranium ever created since 1942 remains in storage somewhere, too hot to handle and impossible to destroy without thrusting radioactivity into the environment.

Virtually every kind of nuclear power plant produces more radioactive material than it starts with – which is precisely the selling point with countries like India, Pakistan, North Korea and yes, Iran. Otherwise, in the 21st century, nuclear power plants are more high-stakes than high-tech. They are basically steam turbines, except they're powered by a power source so dangerous it has to be encased in billions of dollars worth of cement and lead.

“Globally, the annual accumulation of spent fuel from nuclear power plants is equivalent to 90,000 bombs’ worth of plutonium per year,” said Dr Arjun Makhijani, “and all the fuel does, is boil water.”  President of the Institute for Energy and Environmental Research, Makhijani's many awards including being named a Ploughshares Hero in 2006. He is author of the 2007 book Carbon-Free and Nuclear-Free: A Roadmap for US Energy Policy which concludes that the US already has enough renewable energy sources to survive with sharply decreased carbon output. But to replace the coal plants with nukes, he said, the US would have to build 3000 nuclear power plants, one a week.

Currently there are 430 nuclear power plants globally, of which 104 commercial nuclear power plants operate in the States, most of which are approaching the end of their 30 – 40 year life expectancies. The CBC recently reported that Canada has five power plants housing 22 reactors but not all are in operation. Most are in Ontario. The new Parti Quebecois government has decided to close Gentilly II in Quebec, partly because of the prolonged and overbudget refurbishment of Point Lepreau in neighbouring New Brunswick.

Decommissioning a plant costs an estimated $1 billion and takes at least 10 years, said a Reuters story last year – and that’s when things go well. Cleaning up Hanford, MN — receptacle for wastes ever since the very first atomic experiments — is a full scale industry that has made the area America's fastest growing municipal zone,, according to ENE Energy News.

If we’re not able to stop these mines, it means certain genocide for the Great Sioux Nation.

“It’s the waste, stupid!” said Jeff Patterson. “Waste is radioactive for thousands of years.”  Indeed, the industry has generated “A mountain of waste 70 years high,” as the conference posters said. Greenpeace has estimated that  “The global volume of spent fuel was 220,000 tonnes in the year 2000, and is growing by approximately 10,000 tonnes annually… Despite billions of dollars of investment in various disposal options, the nuclear industry and governments have failed to come up with a feasible and sustainable solution.”

That is to say, all of the enriched uranium ever created — since 1942 — remains in storage somewhere, too hot to handle and impossible to destroy without releasing vast amounts of radioactivity into the environment. Buried, waste can leach into the air, soil and groundwater; burned, the radioactivity remains in the air.

For decades, the US pursued a plan to bury high level wastes in a central repository, preferably a rocky cavern with no water. Eventually, the Department of Energy named Yucca Mountain, Nevada. In 2009, the Obama administration  shut down the project, cutting the government's losses at $12 billion and 30 years. The Department of Energy dismantled its program and closed down the tunnel. "The only resident was a barn owl," said Steve Frishman, a geologist who has both insider and outsider experience working with Nevada and Texas Nuclear Waste programs.

Frishman reminded the conference that transportation of nuclear materials was the big issue for most people in the country. "With reactors in 32 states," he said, "transportation to Yucca Mountain would involve travel through 42 different states."  The hazards of shipping spent fuel — that is, "high level" or weapons grade — nuclear material on the highways are heartstopping, not just in case of an accident, but also for the people in the endless stream of cars that would travel next to the nuke trucks.

Since only a geiger counter can detect this invisible, odourless deadly toxin, thousands if not millions of US citizens already have been casualties of the pursuit for nuclear power. Author Kristen Iversen spoke at the conference; her memoir Full Body Burden meticulously documents the human costs of the Rocky Mountain Flats nuclear weapons plant among her friends and classmates in a nearby wealthy suburb, drawing on her own experience growing up in (apparently) idyllic Arvada, Colorado. A multitude of oral histories and “atomic audits” now document that people who live near nuclear dumps suffer a variety of serious health conditions and high mortality rates at every age.

“If we’re not able to stop these mines, it means certain genocide for my nation,” said Charmaine White Face, who brought a report from the Great Sioux Nation in the middle of South Dakota. She also brought maps to project onscreen, showing the locations of  abandoned open-pit uranium mines on Sioux territory — 89 in the Cave Hills area alone. “A private, abandoned, open-pit uranium mine about 200 meters from an elementary school in Ludlow, SD, emits at least 1,170 microrems per hour, more than four times as much as the Fukushima power plant,” she said.

An independent researcher calculated that 3,242 open-pit uranium mines and prospects can be found in the four state region around the Great Sioux Nation, and that nearby creeks and rivers carry radiation to the Missouri River and ultimately to the Mississippi.

“There are 2.5 metric tonnes of plutonium sitting in a vault 25 miles from where I lay my head every night,” said Robert Chavez, a spokesperson for the Ohkay Owingeh and Santa Clare Pueblo Indian nations, located near the Los Alamos National Laboratory in New Mexico. “We live next to the richest community in US, but many families go to bed hungry. Los Alamos is the #1 employer for my people, because they pay good wages. The #2 employer is Walmart.”

“Radiation leaks out at every stage of the fuel cycle,” said Jeff Patterson, “from extraction, to processing to storage to transportation. It never goes away.” And although the industry points to the “half-life” of radiation as reassurance that the stuff decays eventually, the half-life of “high level” wastes (eg plutonium fuel rods) is 24,000 years – and it remains lethally radioactive for up to a full millennium.

Such deadly facts are obscured because “The industry is characterized by secrecy, coverup, and minimization of hazards,” said Patterson. These factors conceal the three reasons the public would reject nuclear power plants if they were aware of them. He cited “the three poisonous Ps: Price, Pollution, Proliferation.” Nuclear power plants are astronomically expensive, inherently polluting, and inevitably lead to proliferation of nuclear weapons.

“Women and children are more vulnerable to ionizing radiation than adult males are,” said Dianne D’Arrigato, from the Nuclear Information and Resource Service. “For every two men who get cancer and die from exposure to radiation, three women do.”  The NIRS fact sheet on varying vulnerability concludes, “The only radiation standard certain to protect everyone is zero. Given the fact that there is no safe dose of radiation, it is an appropriate goal.”

The US First Nations take a similar view, and propose a new Uranium Exploration and Mining Accountability Act to present to Congress, which calls on the Nuclear Regulatory Commission to put a moratorium on processing and permits for uranium exploration or mining until there is a solid Action Plan for reclamation of the sites that already exist.

Splitting the atom seemed brilliant at the time — and mathematically, it was! Fission produced explosive power in return for a small investment in energy. Controlling that explosive power has proved to be problematic.

“Brilliance without a moral anchor can be a big problem,” said Arjun Makhijani. If legislators decided to pull all funding for developing nuclear power plants and put that money into renewable energy instead, he said, “I think we can have a completely renewable energy system in 25 years that will be more reliable than our current system.”

Penney Kome has been researching and writing about nuclear issues since the 1980s. She is co-editor with Patrick Crean of Peace: A Dream Unfolding (Sierra Club Books 1986), a coffee table anthology about civil society's successful efforts to fend off a nuclear war during the Cold War.

3 Responses to “Under the volcano: living with the mountain of radioactive waste”