Sustenance farms destroyed so corporations can grow corn for biofuels.

Globally, an area more than double the size of British Columbia has been sold off in the rush for land. That's land that could feed nearly 900 million people — the number of people who go to bed hungry every night.

Oxfam's research shows that land sold as "unused" or "undeveloped" is often being used by women to grow food, raise livestock and collect water and firewood for their families. But because women have very limited ownership of land to begin with, it is even easier for companies to take this land away from them.

What is a land grab?

When profits are being pocketed while poor women lose their livelihoods, rights and access to much needed resources, land acquisitions become land grabs. Land grabs:

Live ammunition and tear gas were used to evict the people of 14 Mayan Q’eqchi villages in Guatemala’s Polochic River Valley beginning in the dead of the night of March 15, 2011.

Soldiers evict poor farmers, destroy everything they own. 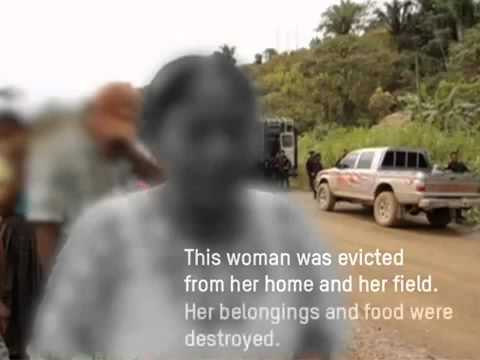 Residents were given an hour to leave. Hundreds of homes were burned down and crops destroyed. About 800 families were left with no shelter or food, many are now camping on the sides of the road. This violence was to clear the way for a large sugarcane plantation to produce biofuel.

"The men fled to the mountains, the women had to find a way to live.
People lost everything; they became nothing but cheap labour."

People around the world are resisting land grabs and want change.

What can I do?

December 30 is Finance Minister Jim Flaherty's birthday! Send him a birthday card and remind him why land is so important to people, particularly women living in poverty.

Many investors are fueling a global land rush—transnational companies, banks, hedge funds, private equity firms. But one investor stands out: the World Bank.

The World Bank finances land deals. It also influences how land is bought and sold. So this means it has the power to get the situation under control.

What can Canadians do?

Finance Minister Jim Flaherty’s birthday is December 30, and he is Canada’s governor of the World Bank. Oxfam Canada is urging Minister Flaherty to speak up on land grabs at the World Bank spring meeting. Send him this birthday card to help us get the message across. Here’s how:

Ending land grabs is possible, but for it to happen, effective global action is necessary.

Learn more about land grabs and what it will take to stop them.

Oxfam Canada works with people to secure their basic human rights, combining support to long-term development and humanitarian responses with research, advocacy and campaigning against the root causes of poverty and injustice.