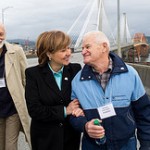 "@Surrey Police: #IceIceSurrey If ice is a problem, yo, you can solve it, check out this link while my DJ revolves it."
– Surrey, England police warning on Twitter.

Who knew that the $3.3 billion Port Mann Bridge was designed by slippery 1990s rapper Vanilla Ice? Not BC Transportation Minister Mary Polak, who will probably never listen to "Ice Ice Baby" again.
More importantly, why was Polak blaming the 40 unlucky drivers involved in ice-caused crashes on the bridge Thursday?  Why was she also blaming the totally predictable freezing wet, foggy weather — everything but the actual contractor responsible for making sure there's no ice on the bridge?

“For black ice, no speeds are safe. You can lose control on black ice at 10 mph, particularly if there is any banking or slope to the roadway.”

"There's nothing they've done that they were negligent in," Polak said of Mainroad Contracting. "There's nothing with respect to what they did that they could have predicted what did happen with any certainty."
Polak went on to put the blame on drivers.
"People are able to reach speeds on the bridge at rush hour they never were before. As with any type of crash, there's a number of different causes and issues at play. This is unfortunately just the kind of circumstance people encounter on the road… chain reactions result in large numbers of claims," Polak continued.

“Attributing the root cause of road ice crashes to people driving too fast is similar to saying that plane crashes are caused by pilots failing to keep their aircraft in the air.”

There's only one problem with that last statement. The minister doesn't know her ice from her elbow.
The website Icy Road Safety explains all that Polak needs to understand about this winter hazard.
"Attributing the root cause of road ice crashes to people driving too fast is similar to saying that plane crashes are caused by pilots failing to keep their aircraft in the air," the website explains. "For black ice, no speeds are safe. You can lose control on black ice at 10 mph, particularly if there is any banking or slope to the roadway."
And guess what? The new sloping Port Mann Bridge was covered in black ice, despite the contractor claiming they patrolled it just an hour before and found no problems.
But when you apply a salt brine solution 25 hours in advance and hope everything will stay safe, you're on thin ice.
As police reported, there was no visible salt or gravel and more ice than the Vancouver Canucks have seen this season.
Despite that, Polak argues neither the contractor nor the province is responsible for the crashes and not only will drivers' tolls not be refunded, they'll be responsible for ICBC insurance deductibles too.
If your car was damaged Thursday, you might think about calling a lawyer and then asking the experts from Icy Road Safety to testify, because here's what they say:
"An icy bridge's most dangerous threat is their element of surprise — they catch drivers off guard, who are traveling at full speed because the rest of the roads are either clear or just a little wet," the website notes, adding that bridges freeze first because they are exposed top, bottom and sides by icy air compared to just the surface on a road.
And unlike BC's transportation minister, the website, supported by several American state transportation agencies, cities, weather services and others, doesn't blame drivers.
"The result of a vehicle encountering black ice is no different than if it had been blown off the road by a tornado, in that both are 100 percent a result of external weather-related forces that are of no fault of the driver," it states.
Polak should do the right thing — demand the contractor pay for damage done to cars last week and make them responsible for any similar black ice bang ups.