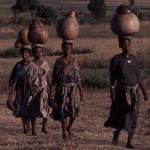 In the 2013 Federal budget, Minister Jim Flaherty announced that activities currently carried out by CIDA (the Canadian International Development Agency) will now be under Department of Foreign Affairs and International Trade (DFAIT), a ministry focused on political relations and trade. The new department will be called Department of Foreign Affairs, Trade and Development (DFTD).

Prime Minister Harper’s adding the “D” for “development” is gimmicky. It is unclear whether this new agency will support alternative models from the so-called "third sector," civil society, made up of an array of organizations such as non-profits, cooperatives, self-help groups, microfinance institutions, women’s associations, faith-based organizations and advocacy organizations looking at business and social issues in new ways.

The Harper government has attempted to downplay CIDA's many successes in order to portray it as an ineffective aid agency unable to carry out its mandate. Instead, this government argues that DFAIT is a more effective way of channeling funds. Therefore, Harperites have effectively abolished CIDA by folding it into DFAIT — which is arguably less a cost saving measure than it is a political move.

We need to ask what purpose is served by Harper’s decision to eliminate Canada’s only agency that invests in addressing social justice overseas.  CIDA is now embedded within an agency whose key focus is on trade and profits — not the social life, humanitarian and alternative programs that are so desperately needed in the developing world.

Former Prime Minister Pierre Elliott Trudeau created CIDA in 1968 to lead Canada’s international effort to help people living in poverty.  CIDA’s  mandate was to increase Canada’s voice in the world and to help countries meet their development objectives, and it had the resources to carry out this work, including a gender equality framework that is a model to the world. CIDA has funded organizations like Desjardins International, which exports cooperative assistance and challenges the current neoliberal shareholder model for businesses.

I have learned from my many years in the field that complex issues like poverty and inequality require long-term investment. Growth  alone does not resolve socially embedded issues, such as unfair distribution of wealth and of work.  CIDA was re-examining systems of oppression and experimenting with different models.

Because CIDA’s focus was to fund alternative ways to humanize our world, it had meaning for many Canadians and in particular for first and second generation Canadians.

Yet perhaps we should have seen the writing on the wall, that the Conservatives would change CIDA’s approach to development — from social justice and humanitarian work to a commercial model.  Their gradual shift away from Africa to middle-income countries, for example, was striking.

Now that CIDA is submerged into DFAIT, it is doubtful that CIDA will retain its autonomy, as the missions of the two agencies are fundamentally different. In other  words, DFAIT’s core areas of interest are diplomacy, politics and trade.  Poverty alleviation is a distant second. Maurice Strong, the first president of CIDA, publicly lamented the loss of an agency whose mandate centered on poverty alleviation for 45 years.

Yet the folding of CIDA into DFAIT, surprisingly, has not generated much public debate.

Harper’s appointment of these two ministers not knowledgeable about international development seems to have been part of a Conservative plan. CIDA ministers Bev Oda and Julian Fantino have both misused their power as ministers.  A few examples:

As many recall, Minister Oda raised a few eyebrows when she revoked funding from faith-based Kairos through a non-transparent process (i.e., the infamous “not” scrawled on the funding form).  Oda also shamed herself by staying at London’s posh Savoy Hotel at $665 a night and being chauffeured around town. She clearly misused taxpayers' money — with resources from an agency committed to reducing poverty. This behaviour was appalling and she apologized for it only after getting caught.

Her successor as CIDA minister Julian Fantino, spent $25,000 on a lavish meeting with CIDA staffers. Other issues have been uncovered, with executives and appointees using CIDA as a slush fund.

Despite the fact that all of these wrong-doings were perpetrated by Conservative ministers and their appointees based in Ottawa, the Conservatives loudly and frequently blame CIDA and its partners in the field for their lack of accountability.  It is Harper’s own appointees who have wasted resources, not the NGOs or the professional staffers. No wonder we have heard little criticism from the government over their questionable actions. Given the challenges within CIDA, the agency has had its focus on alternative development approaches — addressing poverty and social exclusion — beyond just mainstream business frameworks.

Folding CIDA into DFAIT has serious consequences for poor countries that depend on CIDA-type programming. To terminate Canada’s only state agency that cares about humanity, in arenas of inequality and social injustice, reveals a lot about the kind of politics we have seen under Prime Minister Harper’s mandate.

DFAIT's current model is market fundamentalism that reinforces exclusion and inequality.  And, the fact that DFAIT subscribes to this neoliberal model means that it favours certain types of organizations. A focus on income alone cannot cure the world of its problems.

Ireland’s Bono, a rock star fighting for humanitarian causes, has repeatedly said at concerts that the world needs more Canada. I would agree that political manoeuvering and commerce alone cannot build relationships with the world but international co-operation can. CIDA’s role was one that piloted social innovations in dozens of countries in their struggles for democracy and social justice.

As an Assistant Professor in Business and Society and someone who has worked inside development for fifteen years in more than 30 countries, from a professional perspective, I have to question the Conservatives' decision to merge CIDA into DFAIT. My family chose to settle in this country precisely because Canada has always cared about the developing world. If this is Canada’s approach to world issues under Stephen Harper’s government — privileging corporate models over poverty alleviation and humanitarianism — then this is not the same country we found so attractive. I would bet millions of Canadians who are connected to their homelands are also concerned about this political move.

Caroline Hossein is a Sessional Assistant Professor of Business and Society at York University. She holds a PhD in Political Science, an MPA from Cornell, and an LLB from the University of Kent at Canterbury. In addition to her research, Caroline has 14 years of work experience in economic development in at least 30 countries, which including managing a large village bank in Niger, West Africa.

One Response to “Losing CIDA, the Canadian International Development Agency”