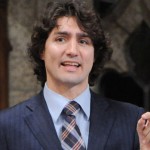 In the afterglow of his leadership romp, his fundraising achievements, soaring poll numbers and even YouTube hits for clips of him in SGNews videos, Justin Trudeau mania is clearly in full swing. Last week he even came to Renfrew, in my part of Canada, and filled a Legion hall. It's been a long time since a Liberal filled a Legion hall here.  The man is clearly a phenomenon.

How long the glow will last remains to be seen, but he has shown a lot of smarts in getting this far and avoiding really tough questions and situations. Contrary to the "lightweight" handle he carried before the leadership race, he has come to be seen as canny if not sly in avoiding taking positions that will only cause what he calls "divisiveness."

The Liberal Party of Canada's time-honoured tradition is to avoid taking positions in order not to split the support base. Taking positions is dangerous. The toxic schism between the right-wing Martin camp and more left-wing Chrétien followers that tore up the Party in the 1990s is a good example. The mis-handled gun registry is another case in point. It cost the Liberals government for a political generation.

If the ballot question in the next federal election is whether Justin Trudeau is good-looking and well-known, he may well become Prime Minister. If it’s about whether he supports out-sourcing jobs and pork for party hacks, the outcome could be different.

Now, Liberals seem poised to finally get over all this history, if the new leader's public support holds. To do so, Trudeau will have to skate continuously on a knife-edge of non-divisiveness.

Crisis forces people to take positions, however, and crises are occurring as we speak. There will be more. Skating could become more difficult, because stuff happens.

Three examples of stuff that happened this spring are the Temporary Foreign Worker (TFW) abuse fiasco, the Senate fraud fiasco and the Bangladesh sweatshop collapse. These very separate events are the kind of things that will force the youthful, rock-star leader with the gorgeous looks and household name to take a side that risks losing support to the left or right.

On TFWs, everyone understands the need for truly temporary help to fill some needs. But even in such cases, the real problem is a refugee and immigration system that's become unfair, dysfunctional and mean. The Liberals used to be the party of immigration. Trudeau will increasingly be pushed to commit to major reforms here so the TFW program becomes what it was intended to be — rather than a way to out-source Canadian jobs and drive down wages.

The Senate abuse scandal is not going away. If anything, it is spreading. So far, one Liberal Senator has been fingered and is facing possible criminal charges. With the Senate's culture of entitlement,  there may well be more. It will become increasingly uncomfortable for Justin Trudeau to continue to tell Canadians that, if elected Prime Minister, he will keep throwing billions into the trough.  Many Canadians may see promises of Senate reform as thin gruel.

These first two examples may be dismissed by some as "too political" for most Canadians to care about. Bangladesh is not. Last month's hideous sweatshop collapse and the resulting gripping images, like the photo of the couple embracing as they died together, hit us all in the guts.

Some friends of mine from Renfrew are good examples. He works in building supplies. She works in an office. They're not big on politics, but they both knew they had only heard about this disaster because it was so huge. They told me that that since "free trade," everything we buy comes from poor places like China and Bangladesh instead of places like Renfrew. They know that working people in those far-away places have no protection. And they're also pretty worried because they have kids and know that most kids can't find decent jobs unless they go into boom-and-bust resource extraction in remote areas.

Even though they're not really worrried about their own jobs because theirs couldn't easily be outsourced, they still don't feel safe. With all the foreign worker programs and trade deals, they're always in competition with others whose jobs have already been outsourced or might be soon.

So where does that leave things in Renfrew, where Justin filled the Legion?

Many will recall that although John Turner's Liberals fought against free trade in 1988, the Liberal Party has been enthusiastically supportive of it since Jean Chrétien was Prime Minister. In the wake of the TFW scandal and the Bangladesh disaster, people like my friends will come to wonder whether today's approach to trade deals is helping or hurting them.

If the ballot question in the next federal election is whether Justin Trudeau is good-looking and well-known, he may well become Prime Minister. If it's about whether he supports out-sourcing jobs and pork for party hacks, the outcome could be different.

Tom Mulcair's NDP will be challenged to compete with Trudeau's Liberals on the basis of youth and popularity. It doesn't matter that the NDP's federal caucus, in fact, features dozens of 20- and 30-somethings who look great and have actually done quite well as MPs.

The question is where the people who work in building supplies and offices in Renfrew see Justin — or Mulcair — coming down on issues hitting closest to the bone.

2 Responses to “Events could force Justin Trudeau off the fence”