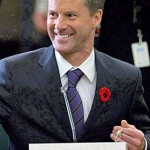 A little down time today at the office. Gives me a chance to catch up on my diary writing.   Not much going on in the PMO these days. A trade deal with the Europeans. La-di-da! Review of Chinese takeovers. Dullsville! Pipelines for that muck Alberta tries to pass off as oil. What a snore! Oh, wait. There’s a call coming in from Mike Duffy. Gotta run.

The Duffster dropped by this morning, as we arranged. Someone here suggested I shouldn’t see him since he’s under investigation in the Senate. Wow! Conspiracy theorists right here in the PMO! I assumed Duff just wanted to join me for a jog or needed help filling out Senate forms. LOL. That’s what happens when people know you’re the smartest guy in the room. They come to you for help. But this turned out to be more. He broke down…he wanted money. Geez, it was awful. In all my years in private equity, I’ve seen tragedy, people losing their homes and all, but never a sight like this — a grown man unable to repay expenses unlawfully incurred while serving in Canada’s top chamber.

Luckily I happened to have $90,000 in my chequing account. That’s a lot of dough, but WTF it was worth it to see the Duffster smile again.

You know, Diary, people think that, behind my boyish good looks, I’m nothing but a ruthless, well-oiled machine, the architect of the PM’s tough persona — “Give-‘em-the heave-Steve” “commit the crime, do the time.” But some things just get to me. My heart went out to Duffy.

Sometimes there’s nothing you can do. You feel helpless. Like with climate change or the Temporary Foreign Worker Program. All those foreign workers allowed into Canada, stealing jobs from Canadians. It’s terrible. But what can we do here in the PMO? It’s different with the Duffy situation. It may be a small thing, but we can actually make a difference.

Luckily I happened to have $90,000 in my chequing account. That’s a lot of dough, but WTF it was worth it to see the Duffster smile again.

Another quiet day. TGIF. May slip out early to pick up some jogging shorts. Don’t like to look like I’m watching the clock though.

Duffy announced today that he’s repaid the $90,000. The question has crossed my mind: Should I tell the big boss about the Duffy cheque? I keep wondering: What would Haldeman do?

Why do people keep complaining about the Trudeau attack ads? He was a drama teacher, for God’s sake! Not a lawyer or a businessman or a private equity guy. A drama teacher! What was he thinking?

Watched a bunch of episodes of “House of Cards” last night. So cool. I love all the corruption in Washington. Also allowed me to kill time before getting up at 4 a.m. to run.

Saw Senator Wallin yesterday, but quickly crossed the street. Was afraid she might try to hit me up for her expenses. I’d like to help, Diary, but you know there’s a limit. There are kids dying in Africa…

Media reports today say Duffy’s audit is complete. Apparently he billed taxpayers for meals in Florida! Shows how hard up he really was. Glad I was able to help. That reminds me about the Duffy cheque. I’ll tie a string around my pinky so I don’t forget again to mention it to the PM.

Not a good week. Duffy and Wallin resigned the caucus, and some folks are suggesting I’m the problem. To top it off, it’s my 50th birthday, and not even a card from Duffy! Weird how ungrateful people can be. I can’t lie to you, Diary, that hurt a bit.