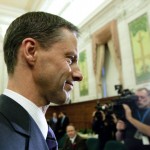 For a guy forced to resign at the centre of a raging political storm, Nigel Wright has so far emerged largely unbruised.

While Senators Mike Duffy and Pamela Wallin would be hard-pressed these days to find Conservatives willing to follow them on Twitter, Nigel Wright has been staunchly defended by conservative guru David Frum, who described Wright as the person he most admires in all of British, American and Canadian politics.

Wright was one of three founding directors of Conservative Fund Canada, which was set up in 2003 to finance the new conservative movement in its bid to bring about a conservative revolution in Canada – an aspiration Wright strongly shares.

Even beyond conservative circles, Wright has largely been depicted as an honourable and decent fellow who generously but inappropriately dug into his own pocket to pay off Duffy’s improperly-claimed $90,000 Senate expenses.

Less attention has been paid to Wright’s role as one of the Harper Conservatives’ top bagmen.

In addition to being a key player in Stephen Harper’s rise to power and the push to “unite the right” a decade ago, Wright — a Bay Street insider who served as managing director of the powerful private equity firm Onex — has been deeply involved in the money side of conservative politics.

Wright was one of three founding directors of Conservative Fund Canada, which was set up in 2003 to finance the new conservative movement in its bid to bring about a conservative revolution in Canada – an aspiration Wright strongly shares.

Until becoming Harper’s chief of staff in 2010, Wright spent seven years on the board of the Fund, along with corporate high-flier Senator Irving Gerstein.

Wright and Gerstein developed the Fund into an effective fundraising machine that underwrote Conservative election campaigns and developed the party’s sophisticated computer systems. They also battled Elections Canada over the “in and out” scandal – Wright is named in court documents — in which the Conservative party eventually pled guilty to election law violations and paid hefty fines for using a complex scheme that resulted in campaign overspending.

Wright’s role as one of the party’s key money men bears scrutiny, since the notion that he acted on his own – paying off Duffy with his own money without telling the prime minister — is central to Harper’s insistence that he knew nothing about the possibly illegal payment to Duffy.  It seems likely that Harper either knew about the Duffy payment – or had authorized Wright to handle dicey matters without telling him details, thereby assuring himself “plausible deniability,” in case problems developed.

But even if Harper didn’t “know” about the payment – just as Bill Clinton didn’t “know” Monica Lewinsky – there’s still the question of where the $90,000 came from.  While Wright may have written the cheque on his own account, might he have expectations of reimbursement from party funds or wealthy Conservative donors?

This point seems important because it goes to the credibility of the narrative that Wright acted alone rather than as part of a broader strategy, coordinated by the party or PMO, to shut down the ongoing Senate scandal — which, like a dripping tap, kept delivering fresh embarrassments almost daily to the Conservative brand.

It was surely agonizing for Harper and Wright to watch as their well-laid plans to foster a Margaret Thatcher-style revolution in Canada were put in jeopardy by profligate senators who apparently had trouble figuring out not only where they lived but also the difference between their own purse and the public one.

The Conservative narrative about Wright recklessly freelancing a private solution to the Duffy problem seems out of sync with what is known about Wright – that he’s a team-playing, party loyalist who is highly disciplined (getting up at 4 am to run 20 kilometers), with a strong connection to the money-raising side of the party.

A public inquiry is clearly needed to establish how the Duffy payoff was orchestrated – which is essential for democratic accountability of the Harper government.  Instead, Harper is leaving the matter to be privately reviewed by Mary Dawson, whom he appointed Ethics Commissioner.

Harper is counting on Dawson being willing to believe – along with perhaps a handful of Canadians — that Nigel Wright acted entirely alone and purely out of generosity.