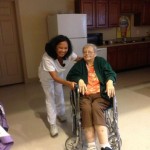 "What is it about being old and infirm that you can be treated with indignity?"
– Independent MLA Vicki Huntington on the $25 monthly wheelchair rental fee

The provincial election is over. Now it’s time to force elderly disabled people to pay the price for the BC Liberals’ promise to balance the budget this year. Starting September 1, both the Fraser and Vancouver Coastal Health authorities will charge seniors a $25 monthly “maintenance” fee for use of a wheelchair in public extended care facilities.

What’s worse about the fee is that nearly all the wheelchairs were donated by family and are manual — hardly needing $300 a year to keep rolling.

It’s bad enough that seniors in residential care already pay 80 percent of their pre-tax income just for their accommodation and food.  Now the government wants an additional $300 a year for wheelchairs these seniors obviously need as the only alternative to spending day and night in bed.

The fee can only come from their $200 monthly comfort fund that now covers personal incidentals like shampoo, Huntington said. “The most vulnerable people are being nickeled and dimed,” Huntington told me Monday. “Basically everybody in Mountain View Manor is in a wheelchair.”

And what’s worse about the fee is that nearly all the wheelchairs were donated by family and are manual — hardly needing $300 a year to keep rolling, she said.

You can expect to see many more such nasty surprises in the weeks ahead, as Premier Christy Clark looks for the hundreds of millions needed to meet her campaign pledge of a balanced budget.

Draconian spending cuts will likely be required at the two biggest ministries — health and education. In a $44 billion provincial budget, health takes up $18.4 billion (42 percent), while education costs $12 billion (27 percent). Such costs are the reason those who depend on public services — like seniors in wheelchairs — should be very afraid.

Huntington fears more cuts like those at Mountain View Manor with less scrutiny of them.  “We are going to see more of it. And it’s being done without public discussion,” she said.

Her advice to family members and those concerned?  “Bombard MLAs’ offices with phone calls, letters and e-mails and contact the minister of health [Terry Lake],” Huntington said.

One Response to “Elderly nickeled and dimed in BC facilities”