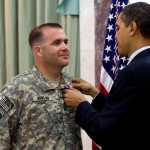 “America is at a crossroads,” US President Barack Obama said on May 23, in a speech that clearly stated his intention to end the US’s state of perpetual war, and to achieve that result at least partly by using drones. As I wrote in Drones: re-inventing war, drones are the key to changing international conflict from being hellishly bloody and expensive mass combat, to being intensely focused violence in a specific area for a short time — that is, policing.

“For over the last decade,” Obama said, counting up the human and economic costs of the Iraq and Afghanistan conflicts, “our nation has spent well over a trillion dollars on war, helping to explode our deficits and constraining our ability to nation-build here at home.  Our servicemembers and their families have sacrificed far more on our behalf…”

Obama used the crossroads moment to strike out on the path towards peace. He started by calling off George Bush’s War on Terror.

This was no convocation speech or abstract theorizing from the President. He was addressing  military professionals at the prestigious National Defense University — advising them strongly that the next generations of soldiers will have to adjust to this new approach and new equipment.

Obama used the crossroads moment to strike out on the path towards peace. He started by calling off George Bush’s War on Terror.   “..we must define our effort not as a boundless ‘global war on terror,’” he said, “but rather as a series of persistent, targeted efforts to dismantle specific networks of violent extremists that threaten America.  In many cases, this will involve partnerships with other countries….”

In the same way that Obama’s administration ended a decade of  airport signs and repetitive ominous announcements that “The terrorism threat level is orange,” so did he use this speech to tame the tension caused by fear of unknown assaillants — monsters under the bed.  The terrorism threat, he said, is about what it has been since the 1980s, and decreasing. Just as he had counted the costs, now he recounted all the US victories against al Qaeda and extremists, and concluded that the US has succeeded in significantly reducing the threat, leaving: “…lethal yet less capable al Qaeda affiliates; threats to diplomatic facilities and businesses abroad; homegrown extremists.” This is the future of terrorism, he said, and also its past, before 9/11. And he described how his administration is addressing each type of threat.

We are at war with an organization that right now would kill as many Americans as they could if we did not stop them first.  So this is a just war — a war waged proportionally, in last resort, and in self-defense….”

He maintained American exceptionalism, though, saying the US would uphold its role policing the world to keep any threats at a distance — including reaching into some failed states. “Al Qaeda and its affiliates try to gain foothold in some of the most distant and unforgiving places on Earth… In some of these places — such as parts of Somalia and Yemen — the state only has the most tenuous reach into the territory.  In other cases, the state lacks the capacity or will to take action…. “

Drones offer access and striking capability in such situations, he said. And contrary to popular belief, he stated that “America’s actions are legal… Under domestic law, and international law, the United States is at war with al Qaeda, the Taliban, and their associated forces.  We are at war with an organization that right now would kill as many Americans as they could if we did not stop them first.  So this is a just war — a war waged proportionally, in last resort, and in self-defense….”

Moreover, he noted that “To do nothing in the face of terrorist networks would invite far more civilian casualties — not just in our cities at home and our facilities abroad, but also in the very places like Sana’a and Kabul and Mogadishu where terrorists seek a foothold.  Remember that the terrorists we are after target civilians, and the death toll from their acts of terrorism against Muslims dwarfs any estimate of civilian casualties from drone strikes…”

In these cases, drones are a lesser evil than other military action, he said. “…By narrowly targeting our action against those who want to kill us and not the people they hide among, we are choosing the course of action least likely to result in the loss of innocent life…”

“…Where foreign governments cannot or will not effectively stop terrorism in their territory, the primary alternative to targeted lethal action would be the use of conventional military options…  Conventional airpower or missiles are far less precise than drones, and are likely to cause more civilian casualties and more local outrage.  And invasions of these territories lead us to be viewed as occupying armies…”

“Not only did Congress authorize the use of force,” he emphasized, “it is briefed on every strike that America takes. Every strike.”

His speech described in detail the policies behind the decision-making process for each drone strike, the guidelines and approval from the appropriate Congressional committees. “Not only did Congress authorize the use of force,” he emphasized, “it is briefed on every strike that America takes. Every strike.”

Drones are only used to stop known aggressors, he said, when intelligence indicates they have plans to hurt other people. “America does not take strikes to punish individuals; we act against terrorists who pose a continuing and imminent threat to the American people, and when there are no other governments capable of effectively addressing the threat.”

Recognizing the enormous responsibility — “Alongside the decision to put our men and women in uniform in harm’s way, the decision to use force against individuals or groups — even against a sworn enemy of the United States — is the hardest thing I do as President,” he said — he has asked his administration to propose models for judicial oversight of this kind of decision.

Furthermore, Obama told the Defense Department faculty that he pledged to engage Congress in refining, and ultimately repealing, George Bush’s 2001 Authorization for Use of Military Force (AUMF) which gives the US President authority to launch military action without Congressional oversight. “Unless we discipline our thinking, our definitions, our actions,” he warned, “we may be drawn into more wars we don’t need to fight, or continue to grant Presidents unbound powers more suited for traditional armed conflicts between nation states.”

Obama’s administration has been shifting the entire US defense strategy away from “traditional armed conflicts,” and “readiness” — code words for letting the Pentagon spend up to half of the US federal  budget. Traditionally, in the US, "defense" has been the major form of government job creation, leading to a widespread perception that the US is "addicted to war."  Think of Shock Doctrine in reverse — at the depth of the Great Recession, the Obama administration moved to wrest back control of the economy from the entrenched military-industrial complex that President Eisenhower warned about in the 1950s.

Think of Shock Doctrine in reverse — at the depth of the Great Recession, the Obama administration moved to wrench control of the economy back from the entrenched military-industrial complex that President Eisenhower warned about in the 1950s.

Or, as the House Armed Services Committee Chair Howard P “Buck” McKeon remonstrated in a Washington Post op-ed piece, “There have been three rounds of defense cuts in the past four years.”

An odd thing occurred during this speech, when Obama addressed the issue of the prison at Guantanamo Bay. He reminded the audience that, "As President, I have tried to close GTMO.  I transferred 67 detainees to other countries before Congress imposed restrictions to effectively prevent us from either transferring detainees to other countries or imprisoning them here in the United States." And here the transcript shows that he was interrupted by a shout from the audience — from Medea Benjamin of CODEPINK.

"There are 102 people on a hunger strike," she yelled. "These are desperate people!"

"I'm about to address that," he replied, "if you will let me speak." And for the next few minutes, he let her continue shouting, chiding her only once that, "Part of free speech is you being able to speak, but also, you listening and me being able to speak."  But as she continued to raise questions, he went off script and told the audience, "The voice of that woman is worth paying attention to. Obviously, I do not agree with much of what she said, and obviously she wasn’t listening to me in much of what I said.  But these are tough issues, and the suggestion that we can gloss over them is wrong."

Obama noted that force alone will not guarantee safety, that the US needs to re-build goodwill, and help create stable and prosperous societies all around the globe, to minimize free floating discontent.  But the main message he brought to the National Defense University — and no doubt, to the Pentagon — is that they need to be thinking about security in a whole new way.

Indeed, Obama describes a new "defense" purpose which sounds much more like policing.  If he can change the nature of modern war — from clumsy and destructive to nimble and deadly — that will affect everything from the economy to the environment. The long-delayed Peace Dividend may be at hand.

In the meantime, the US has a president who has the backbone to stand in front of the top military brass and tell them to start revising their time-honoured strategies. “This war, like all wars, must end,” said Obama. “That’s what history advises.  That’s what our democracy demands.”