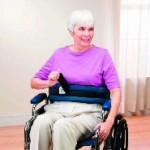 Disabled seniors in wheelchairs across British Columbia living in residential care are going to have even more money picked out of their pockets by the cash-hungry provincial government, according to an independent MLA. Independent MLA Vicki Huntington said in an interview Saturday that not only will seniors be forced to pay a $300 a year wheelchair "maintenance" fee but all future wheelchair service will be fully privatized, costing them hundreds to thousands of dollars for necessary mobility equipment.

22809The Fraser Health Authority announced the new policy in a May 31 letter to seniors at South Delta's Mountain View Manor that was made public by their MLA. That letter states that after September 1, when the "maintenance" fee comes into effect for current residents, all new residents "will be required to purchase or rent equipment from an external supplier."

Is there any question that the sudden imposition of a $300 a year wheelchair “maintenance” fee — never before charged on equipment mostly donated by families is anything but a desperate attempt to help balance BC’s budget?

Manual wheelchair monthly rental fees range from $75 to $100 a month, while purchase prices range from several hundred to several thousand dollars. The only exceptions require "financial hardship" be demonstrated.

The new policy came the same week Premier Christy Clark gave government's political staff a significant increase in their salary eligibility by up to $86,000 a year.

The new policy and raises for political staff, Huntington says, are both "out of whack".

"The government's priorities are completely out of line with the public's," Huntington said. But the situation will only get worse. The Vancouver Coastal Health Authority will also charge a wheelchair maintenance fee and now the Interior Health Authority is "looking" at one too.

Is there any question that the sudden imposition of a $300 a year wheelchair "maintenance" fee — never before charged on equipment mostly donated by families is anything but a desperate attempt to help balance BC's budget? Huntington says it's a "money grab" by the BC Liberals, who promised to balance their budget this year.

"I think it's a new way to obtain revenue," she said. "Really what the system is trying to do is strip every penny away from people. They already take 80 percent of after-tax income away and now they're saying: 'If you've got it, we'll take it.'"

The fee will have to come from the $200 a month "comfort fund" seniors in residential care have for personal incidentals — like podiatry, non-prescription pharmacy items, shampoo, cable TV, hairdresser, special outings and other costs. That's often the only money they have left after paying 80 percent of their after-tax income to cover residential care home fees for accommodation, food and basic services.

To summarize: disabled seniors will have to pay a new $300 a year fee for the same wheelchairs they now use, out of their small fixed incomes, while BC Liberal political staff get rich pay raises.

If you think that's dead wrong, join my new Facebook group Wheelchairs for BC Seniors and send the government a message to put disabled seniors first, not their already well-paid staff.