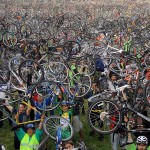 Cycling is smart but some cyclists need to get smarter.

Bicycles are an increasingly popular, affordable and practical transportation option. Many cities are making life easier for cyclists by building separated lanes, implementing bike-share programs and introducing regulations to reduce conflict between bikes and cars. You can now find bicycle sharing in 500 cities in 49 countries, including Beijing, Montreal, Chicago, Paris and Mexico City.

In my home city of Vancouver, we’re still waiting for a planned sharing program, but cycling is the fastest-growing transportation mode here, jumping by 40 percent since 2008, from about 47,000 to 67,000 daily trips. This is mainly thanks to an ever-expanding network of bike lanes and routes.

The personal and societal benefits of getting out of your car and onto a bike are well-known: better mental and physical fitness and reduced health-care costs, less pollution and greenhouse gas emissions, often speedier commutes and significant cost savings, to name a few. Studies also show the exercise benefits of cycling exceed negative health effects from pollution and injury.

Still, despite the many arguments in favour of cycling, increased infrastructure always incites criticism — most of it unwarranted. And the behaviour of some cyclists doesn’t help.

Let’s consider some claims from opponents. Two main ones are that bicycling initiatives hurt local businesses and impede car traffic. Numerous studies show the opposite is often true: over the long term, business usually improves and car traffic is reduced. When bike lanes do affect car-commuting times, it’s often by a small amount.

Research by the New York City Department of Transportation found retail sales increased 49 percent along Ninth Avenue after a protected bike lane was built, compared to just three percent for the rest of Manhattan. A Toronto study focused on Bloor West Village found far more customers arrive by foot, bike or transit than by car and “visit more often and report spending more money than those who drive.”

As for impacts on car commuting, bike lanes often have a negligible or even positive effect. More people cycling means reduced car traffic — the real cause of gridlock and slowdowns. Not everyone can use a bike and sometimes cycling isn’t practical. But as people opt for alternatives to cars, the roads open up for those who must drive. A study by Stantec Consulting Ltd. found Vancouver drivers thought it took them five minutes longer to travel along a street with a new bike lane, but it actually took from five seconds less to just a minute and 37 seconds more.

Studies around the world also show that bike lanes have significantly reduced accidents involving cyclists, as well as the incidence of speeding cars.

But if we really want to increase safety for cyclists — and pedestrians and motorists — we all need to take responsibility for our behaviours. People navigating on foot must be aware of surrounding bikes, buses, cars and other people and not wander with their eyes fixed on electronic devices. Car drivers need to follow road rules and be more aware of cyclists and pedestrians. Some cyclists just need to be smarter.

A lot of criticism of the growing number of cyclists in cities is valid: too many blast through stop signs, don’t give pedestrians the right-of-way, refuse to signal turns, ride against traffic, don’t make themselves visible enough and use sidewalks. Many seem to have a sense of entitlement compelling them to ignore laws. It doesn’t take much to learn and follow the rules, and investing in proper gear — including lights and reflectors — is absolutely necessary. You’ll not only be safer; you’ll also be less likely to anger motorists, pedestrians and fellow cyclists.

Some jurisdictions have resorted to increased regulations and penalties to make cycling safer and to reduce conflicts between cyclists and drivers. In Chicago, bike riders face increased fines for disobeying traffic laws, as do motorists who cause bike accidents. The fine for “dooring” a cyclist (opening a vehicle door without looking and hitting a bike) doubled from $500 to $1,000.

There’s really no doubt: anything that increases bicycle use, from separated lanes to bike-sharing programs, makes cities more liveable and citizens healthier. Cyclists must do their part to build support for initiatives that make cycling easier, safer and more popular.