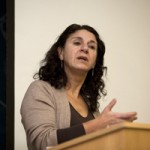 Others may have said it before now and I missed it but the first person I heard discuss the War on Wages was Armine Yalnizyan, of the Canadian Center for Policy Alternatives (CCPA) followed up by Tom Walkon at the Toronto Star. When you look at the publications of the Chamber of Commerce, and the Canadian Centre for Independent Business check the policy initiatives of especially the Tories but increasingly Liberals in power in Ontario and BC, we can see that they have become the political arm of the War on Wages.

This war has many battles and skirmishes internationally, and across the country, at the local, provincial and national level. When the penny drops for people, all of the issues; The Tory attacks on EI latest manifestation travel further for a job, the entire Temporary Foreign Worker Program TFW; the delay in retirement pensions, the shift of priority in immigration to skilled workers and the beginnings of a guest worker program, the foot dragging on raising the minimum wage, the disgusting levels of welfare, the demands on schools-secondary and post secondary to shift away from academics to skilled trades, the new emphasis on aboriginal education, the provincial Tory Right to Work initiatives, Federal Tory instant back-to-work orders with every legal strike, Federal Tory attempts to cut 4 per cent off federal wages, provincial austerity programs that single out public sector wages; the Toronto Ford attacks and privatization of garbage collection, provincial Tory thinking regarding the LCBO.

We could fill this page from the daily headlines regarding governments at all levels, attacks on the wages and other forms of remuneration of organized public workers and private workers as well. It comes from the highest levels, reports from the OECD recommending reigning in public sector unions to control deficits.

The real fear is the Law of Supply and Demand a law they cannot change. Biz and their political flunkies have seen the future numbers and it chills them to the bone. They truly understand supply and demand and they see that, as the big generation of baby boomers retires there will be a serious labour shortage unless biz moves heaven and earth to avoid it. A labour shortage naturally creates pressures to raise wages.  Against that backcloth, all of the business/political behaviour must be judged. They are working overtime to increase the labour supply (late retirement, more skills training, more immigration, TFW, Aboriginal education not motivated by social justice but by cheap labour even finally looking seriously at disabled workers for cheap labour; while at the same time working overtime to hold down wages by attacking EI, welfare, pensions, benefits, and especially unions public and private. When you hear the word flexibility you know sadly the employer means lower wages.

Heiner Flassbeck is Director of the United Nations Conference on Trade and Development. UNCTAD. He is clear and unequivocal on the need for increased wages to save the economy. In fact it is the War on Wages that is destroying the economy. For many years after WW2 wages tracked strongly onto productivity until the 1980s when with Reagan, Thatcher Mulroney, wages became unhooked from productivity, and productivity increases went straight to the profit line and as such to the 1 per centers.

Heiner Flessbeck on the global economy

Biz owners prefer a low inflation economy naturally but lower wages are the real attraction. They have no compunction against raising CEO pay through the roof. Inequality is growing at a staggering rate and beyond the ability of most Americans or Canadians to even contemplate. The following American You tube video graphically demonstrates the problem:

Wealth distribution in the US

Teachers and education workers
The attack on teachers and education workers needs this context. Bill 115 plus the demands to reign in the OTPP and OMERS is infuriating but it is nothing more than the education piece in an overall attack on wages. To the right, the teachers’ (and ed workers') unions are like the trend setters and door openers of the labour movement, the role CAW once had in the private sector.

The stupidity of these policies, Armine Yalnizyan pointed out, is that what seems to make sense for one corporation does not make sense when spread over the entire economy. Controlling the wages of teachers, cops, fire fighters nurses, EMS, college profs in Sudbury or Ottawa, or Windsor or Barrie simply means a slowdown in home sales, fewer appliance sales, and fewer cars purchased from the local dealer, fewer restaurant meals, and so on and so on.

All corporations and small business’ want lower wages but if the other businesses actually achieve lower wages, the first business loses clients.  Liberal economists like Paul Krugman will point out this ironic factor but it doesn’t seem to cause business organizations and their flunky politicians to even blink.

Mr Burns, Homer Simpson’s employer at his private nuke plant naturally wants Homer’s wages lowered but if every employer in Springfield can achieve lower wages, the Springfield economy will collapse, such is the irony of the war on wages.

McGuinty and Duncan clearly drank the austerity-attack the public sector Kool Aid and in the process destroyed their own careers and legacy. The Liberals have been saved only by Kathleen Wynne’s concerns that this direction is destroying the party combined with Tim Hudak and the PCs full-throated cries that they have no such reservations and would go to right wing policies that even caused Mike Harris to hesitate. Tom Walkom is the only mainstream journalist in the country that really grips the problem and picks up on the teacher piece. Tom realizes that the attack on teachers and education workers' wages today puts pressure on steelworkers' wages before the week is out. The union solidarity plea that "an injury to one is an injury to all" is as true today as it was when it was written.

Walkom has also written on the pension’s piece of this puzzle.

Progressives believe in stimulating the economy, creating jobs but conservatives, both business and political, understand that unemployment is very useful to them since unemployment puts downwards pressure on the wages of the employed and stimulus creates upwards pressure on wages. Ever wonder why conservatives hate to stimulate the economy until they can actually look right into the abyss? They don’t get the fact that inequality and unemployment creates serious political instability. This manifested as communism vs. Fascism in the 1930s, Tea Party vs. Occupy Wall Street after 2007.