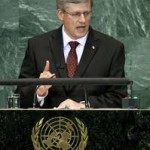 UN no longer able to move on climate change as it once did on ozone.

Perhaps the only thing more stunning than Alberta’s ruinous flooding has been the realization that not even a disaster of this magnitude, right in the heart of oil country, seems sufficient to break the torpor surrounding climate change.  Indeed, federal and Alberta authorities seem undeterred in their dream of turning Canada into an energy superpower, even if it means immersing the country neck-deep in water.

The disconnect is stunning. Graphic footage of rivers overwhelming the nation’s oil capital appear on TV newscasts alongside perky ads about the benefits of the oilsands.

With the new anti-government, pro-business paradigm, the UN was transformed from a body aimed at regulating and monitoring international corporate behaviour to one that “partners” with the corporate sector.

Before the flood waters totally engulf us, it’s worth pondering what has gone so terribly wrong that we — a highly-touted species with a large, complex brain — seem unable to figure out how to protect ourselves from the catastrophic weather events which scientists have told us to expect. Dinosaurs, with their tiny brains, at least had an excuse.

There are some striking parallels between the two crises. In both, an overwhelming scientific consensus quickly emerged about the severity and scope of the problem, a highly-organized campaign based at the United Nations swung into action, while powerful corporate interests invested huge resources in blocking meaningful progress.

In the ozone case, however, the public interest triumphed. Within about a dozen years, a global treaty, the Montreal Protocol was signed, significantly limiting ozone layer depletion and hailed by former UN Secretary-General Kofi Annan as “perhaps the most successful international agreement to date.”

But would such resolute international action on the ozone crisis be possible today — given the dramatic rise in corporate power in recent decades?

The climate battle, launched in 1988 right after the signing of the Montreal Protocol, has been played out in a very different age – one dominated by the mantra “government bad, private sector good” when corporate power has been at its zenith, enjoying a virtual stranglehold on key public policy decisions.

The change can be seen vividly at the UN.  With the new anti-government, pro-business paradigm, the UN was transformed from a body aimed at regulating and monitoring international corporate behaviour to one that “partners” with the corporate sector, note Sabrina Fernandes and Richard Girard in Corporations, Climate and the United Nations, a report published by the Ottawa-based Polaris Institute.

Taking full advantage of this change, the fossil fuel industry became deeply embedded in every aspect of the UN climate change process, using its inside role to effectively scuttle progress, like a fox setting up headquarters right inside the henhouse.

Fernandes and Girard suggest that this ubiquitous corporate involvement – some 4,200 individual corporate lobbyists were given privileged access to the UN negotiating process — managed to render the originally-promising international campaign against climate change effectively dead by 2011.

This suggests that the rising tide of corporate power in recent years, with its sweeping changes to the political culture and global policy agenda, may have been key to enabling the fossil fuel industry to derail a global campaign aimed at preserving the Earth for human habitation – a campaign that, by any logic, should have been unstoppable.

Ironically, the values encouraged in our business-dominated culture discourage the sort of co-operation that may soon become more necessary than ever.

Fortunately, Albertans, while steeped in the mantra of “survival of the fittest” and “greed is good,” seem to have set aside that training and pitched in selflessly to help each other through the crisis.

As we move deeper into the age of climate disaster, these traits of empathy and social solidarity – so belittled in our ultra-competitive, winner-take-all culture– may come to be appreciated again, even regarded as signs of sanity.

2 Responses to “Corporations vs environment”