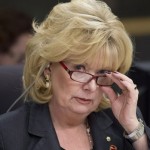 Folks, it is time, past time, to shed a sympathetic tear or two for the much maligned members of the senior house of Parliament, the chamber of sober second thought, where wisdom takes precedence over partisanship. I speak, of course, of the Senate of Canada.

Recent events have not been kind to senators. Pity poor Mike Duffy (“Old Duff,” as he likes to be known). He was so busy to keeping the country safe for Conservatives that he forgot where he lived, ended up with a $90,000 bill for living allowances, and had to go cap in hand to the Bank of Harper (Nigel Wright branch) to bail him out.

Shed a tear, too, for another Conservative senator, Pam Wallin, who, as we learned just last week, has been far too busy in her four-plus years in the upper house to find the time to vote in any election,  federal, provincial or municipal.

Oh, I know what you are going to say. You are going to say that senators, who live on the taxpayers’ dime – recently raised to $135,200 for several months work each year (the best part-time job in Canada, some say) – ought to set an example of good citizenship for the rest of us. At the very least, they ought to stir themselves enough to vote in elections.

No one would expect a tribune of Wallin’s stature to survive on starvation wages, so she had to supplement her Senate stipend by moonlighting as a corporate director.

Other people, ordinary citizens, non-senators, are busy, too, but they don’t whine about it. They work as many hours as they can get, many holding down two jobs. They raise families, get their kids to hockey and choir practice and doctors’ appointments, perhaps care for elderly or sick parents, and volunteer in their communities. They do it 52 weeks a year, for far less than a senator pulls down. And they find time to vote.

But we must be fair to Pam Wallin. Although she is single with no children, she has been busy, very busy, in her own way. As a celebrity senator, she has been expected to travel the land spreading the gospel according to St. Stephen. It’s a thankless task, but someone has to do it. And if her missionary work accounts for some of that $300,000-plus in disputed travel expenses charged to the Senate, so be it.

No one would expect a tribune of Wallin’s stature to survive on starvation wages, so she had to supplement her Senate stipend by moonlighting as a corporate director. (Why senators should be allowed to take money on the side from corporations, some federally regulated, like Porter airlines, is a question for another day.) Wallin did well in collecting directorships – to the tune of roughly $1 million in her first four years of public service in the red chamber.

That’s not too shabby for someone who started as a member of Waffle movement (the radical left of the NDP in the early 1970s), became a mainstream journalist (and a good one) with CBC and the Toronto Star, morphed into a TV celebrity and ultimately heeded the siren call of the Senate (in January 2009).

To confess, there was a time, years ago, when I sort of listened for that siren call. I would write columns every now and again about rehabilitating the Senate. The columns usually included the modest proposal that if the prime minister of the day would just appoint me, I would introduce all sorts of inspired measures to reform the place, or to abolish it (if the PM so wished).

It was all tongue-in-cheek, I think, although the notion of a handsome salary and great perks for precious little work did have a certain attraction. One day I got a phone call from an aide to then Prime Minister Pierre Trudeau. “Geoff,” he said. “Mr Trudeau wants you to know you are on his Senate list. [pause] He said to say yours is the very last name on a very long list.”

Trudeau was a smart fellow – smarter than Harper when it came to Senate appointments.

Cambridge resident Geoffrey Stevens, an author and former Ottawa columnist and managing editor of the Globe and Mail, teaches political science at Wilfrid Laurier University and the University of Guelph. He welcomes comments at the address below. This article appeared in the Waterloo Region Record and the Guelph Mercury.