Canadians learn what to expect from a changing climate.

While Calgary celebrates its resilience at a “Hell or High Water” Stampede, Toronto is drying out after a dramatic storm that saw more rain fall in two hours than the city usually sees in the entire month of July.  Even if you don’t live in Southern Alberta or Mississauga, floods are fodder for dinner table conversations across the country right now. And more and more Canadians are asking whether what we’re seeing is climate change.

Meteorologists are attributing yesterday’s storm in Toronto to a slow-moving thunderstorm system. But as Environment Canada’s David Phillips put it, “Nature was giving us a preview of what we may soon see” from global warming.

The consequences we’re seeing today are the first smoker’s coughs as we continue a two-pack-a-day cigarette habit.

Even when there are clear warnings of the risks, as we saw before Alberta’s floods, experts usually hesitate to link specific events to climate change, because it’s just one factor among many shaping the weather we experience and our vulnerability to it.

That’s true, and it’s absolutely fair — but in a growing number of cases, climate change is playing an important role. The best way I’ve seen it explained is that greenhouse gases put weather on steroids. You can’t say that steroids caused baseball legend Barry Bonds to hit a particular home run, but they definitely increased his odds.

This is what climate change looks like: cities at a standstill, the hassle of insurance claims, flooded basements — and in worst-case scenarios, the tragic loss of life.This is particularly clear with extreme downpours like those seen recently in Alberta and Ontario. A warmer atmosphere holds more moisture, so more rain can fall in any given storm.

In a new report released last week, the World Meteorological Organization showed what the consequences of our greenhouse gas pollution look like on a global scale. The organization found that:

I’m not a scientist; my work at Pembina is about sustainable energy policy. But climate change is the main motivation for the work my colleagues and I are doing. And what makes reports like the WMO’s so scary to me is that the experts conclude we don’t yet have the policies in place to contain the impacts of climate change or to prepare for its effects. So the consequences we’re seeing today are the first smoker’s coughs as we continue a two-pack-a-day cigarette habit.

Recently, it hasn’t been particularly trendy to talk about climate change in Canada. (In the House of Commons, our government has been far more likely to talk about its dislike of carbon taxes than about the reason we might need one.) We’re sometimes told that reducing greenhouse gas pollution is too costly, or that busy Canadians don’t want the potential inconvenience of making greener choices. 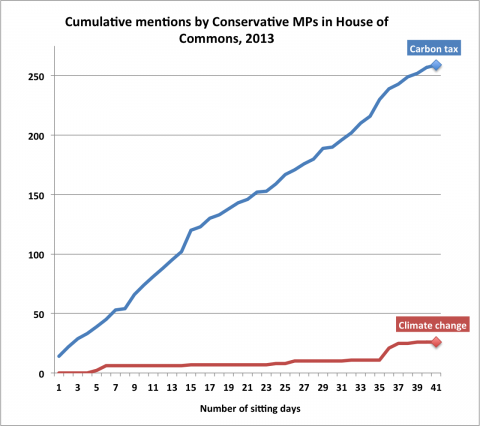 Mentions of carbon taxes by Conservative MPs far outweighed mentions of climate change in the House of Commons this year.

But if you’ve shovelled mud out of a basement lately — as many of my friends in Alberta have — you might have a whole new perspective on whether taking action on climate change is too much of a hassle. And the costs of reducing greenhouse gas pollution pale in comparison to what Albertans are facing as they rebuild homes from the ground up.

So as David Phillips said, we can take this summer’s storms as a preview — but let’s hope they convince us that we really don’t want to watch the full-length disaster movie.

As the director of federal policy at the Pembina Institute, Clare Demerse researches federal government policies that have implications for sustainable energy and climate change. Clare provides analysis to federal officials, politicians and a range of stakeholders as well as acting as a spokesperson in the media on behalf of the Institute.

Clare joined the Pembina Institute's Climate Change Program in 2006 and became Director of the program in 2011. Clare previously worked on Parliament Hill and holds a master's degree in journalism from Carleton University in Ottawa. She is a 2008-2009 Gordon Foundation Global Fellow.