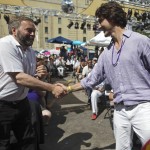 The Justin Trudeau honeymoon is over. The surprise is not that the romance has cooled. It’s that it was so intense, lasted as long as it did, had such an uplifting effect on sagging Liberal fortunes and, in the process, re-ordered the balance among federal parties.

It's been barely a year since Trudeau’s name first surfaced as a serious leadership possibility.  He announced his candidacy last October and was elected leader this past April, just three months ago. Since then the Liberals, who had been presumed dead by many commentators, have risen from their third-place grave.

There is no doubt that Trudeau has created movement, giving moderate voters who cannot warm to Stephen Harper a credible alternative, and given Liberals who switched to Layton and the NDP in the 2011 election an invitation to come home.

Now the Liberals are back in first, back where they had parked themselves, smugly, for most of the last century. They are a bit ahead of the Conservatives, who have conspicuously failed in seven years in power to seize the golden opportunity to broaden their base or to widen their appeal. Meanwhile, the air has gone out of the NDP balloon as the party, minus Jack Layton, has fallen into its traditional spot in third place.

These generalities are based in part on a flurry of new opinion polls released since early June. Political polls — as pollsters are quick to tell us whenever they are wrong — are not predictions. They are just snapshots, presumed to be an accurate portrait of voter intentions the moment they are taken, but not to be relied on when voters wake up the next morning. But the value of polls — albeit limited in my view — is that their snapshots can reveal a trend and reflect movement within the electorate.

There is no doubt that Trudeau has created movement. He has given moderate voters who cannot warm to Stephen Harper a credible alternative. He has given all those Liberals who switched to Layton and the NDP in the 2011 election — or who decided not to vote at all — an invitation to come home. He has made it exciting to be a Liberal again.

In May, the Trudeau Liberals seemed (astonishingly) within reach of a majority government. In the June numbers, reality intrudes; a Liberal minority seems more likely.

The honeymoon may be over but the relationship survives. Eric Grenier is a respected poll aggregator who runs a website called threehundredeight.com (because currently there are 308 Commons seats, about to be raised to 338 for the next election). He reported last Thursday that an average of seven polls in June, with more than 9,000 respondents, put the Liberals at 34.4 percent nationally, the Conservatives at 28.9 and the NDP at 23.8. The trend: Liberals down a significant 5.6 points from May to June; Conservatives, up 1.3 points; NDP, up 0.5 points.

In other words, the Tories and New Democrats are essentially treading water while the Liberals are sinking somewhat. Some Liberal support, a couple of points, appears to have moved to the Greens, from whence it may have come during the Trudeau honeymoon.

In May, the Trudeau Liberals seemed (astonishingly) within reach of a majority government. In the June numbers, reality intrudes; a Liberal minority seems more likely. Grenier projects 134 Liberal seats, 120 Conservative and 80 NDP, plus two apiece for the Greens and Bloc Québécois. Political science Professor Barry Kay, in a projection for the Laurier Institute for the Study of Public Opinion and Policy, is in the same ballpark: Liberals, 131; Tories, 126; NDP, 70; Bloc, 8; Green, 1.

With a federal election still 27 months away, no one would want to take any seat projection to the bank. Who among us foresaw the NDP orange wave in 2011, or Allison Redford’s recovery in Alberta or Christy Clark’s in British Columbia? The pollsters didn’t see it, but they were busy taking snapshots, not video.

About all we can say with any confidence is that Harper has some heavy lifting to do if he wants to win another Tory majority.

About all we can say with any confidence is that Harper has some heavy lifting to do if he wants to win another Tory majority. The NDP’s Thomas Mulcair needs to rekindle the flame of 2011. And Justin Trudeau needs to realize that image and youthful enthusiasm will not carry him back 24 Sussex Drive, where he spent his childhood years while his father was prime minister.

Cambridge resident Geoffrey Stevens, an author and former Ottawa columnist and managing editor of the Globe and Mail, teaches political science at Wilfrid Laurier University and the University of Guelph. He welcomes comments at the address below. This article appeared in the Waterloo Region Record and the Guelph Mercury.