It’s time for white people — especially white parents — to listen, to learn, and to speak out on the terribly painful loss of Trayvon Martin.

If my white 14-year-old son Luke had walked out that same night, in that same neighborhood, just to get a snack he would have come back to his dad unharmed — and would still be with me and Joy today. Everyone, being honest with ourselves, knows that is true. But when black 17-year-old Trayvon Martin went out that night, just to get a snack, he ended up dead — and is no longer with his dad and mom. Try to imagine how that feels, as his parents.

It was a political, legal, and moral mistake to not put race at the center of this trial because it was at the center from the beginning of this terrible case. Many are now saying, “There was a trial; the results must be accepted.” How well the case against George Zimmerman was prosecuted, how fair the tactics of the defense were, the size and selection of the jury, how narrowly their instructions were given — all will be the subject of legal discussions for a very long time.

LeVar Burton describes his concerns when police pull him over 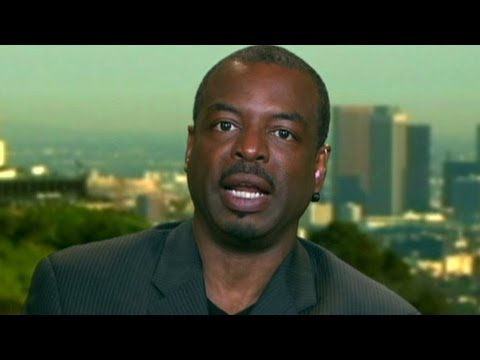 But while the legal verdicts of this trial must be accepted, the larger social meaning of court cases and verdicts must be dealt with, especially as they impact the moral quality of our society.

This is not just about verdicts but also about values. And the impact of race in and on this case, this trial, and the response to it around the country must now all be centrally addressed.

There is no doubt that this whole tragedy began with the racial profiling of Trayvon Martin. In George Zimmerman’s comments, rationales, and actions, the identity of Trayvon as a young black man was absolutely central.

There is no doubt that this whole tragedy began with the racial profiling of Trayvon Martin. In George Zimmerman’s comments, rationales, and actions, the identity of Trayvon as a young black man was absolutely central. Both sides in the courtroom admitted that.

And when the defense put up as a witness a white woman who had been robbed by a black man as central to why Zimmerman picked out Trayvon Martin to follow and stalk — it really said it all. Was she robbed by Trayvon Martin? No. So why should he be suspect because of another black robber? That is racial profiling. Period.

As the Reverend Doctor Martin Luther King, Jr. said in his most famous “I Have a Dream” speech, whose 50th anniversary is coming up this August 24th:  “I have a dream that my four little children will one day live in a nation where they will not be judged by the color of their skin, but by the content of their character.”

King’s dream failed on February 26, 2012, in Sanford, Florida, when George Zimmerman decided to follow Trayvon Martin because of the color of his skin. This led to a confrontation in which a child was killed by an adult who got away with it, because of the way Florida laws were written and interpreted.

Regardless of the verdict that rests on narrow definitions of self-defense and reasonable doubt, it is absolutely clear that racial profiling was present in this whole incident.

What exactly happened between Zimmerman and Martin will never be known, because the boy is dead and the adult did not have to testify and be cross examined. How a black boy responded to a strange man who was following him, and what the stranger did with that, is a story we can never really know. But regardless of the verdict that rests on narrow definitions of self-defense and reasonable doubt, it is absolutely clear that racial profiling was present in this whole incident.

And racial profiling is a sin in the eyes of God. It should also be a crime in the eyes of our society, and the laws we enact to protect each other and our common good.

White parents should ask black parents what they were talking about with their children this weekend. Black moms and dads no doubt pursued their long-standing conversation, especially with their boys, about how to behave carefully in the presence of police officers with guns. Now they must add any stranger who might have a gun and could claim they were fearful of a black man and had to shoot. The spread of legalized carried-and-concealed weapons and the generous self-defense laws that accompany the guns will lead to the death of more black men in particular.

Death is horrible enough. But systematic injustice — one that allows white boys to assume success, yet leads black boys to cower from the very institutions created to protect our own wellbeing — is a travesty. Listen to the stories from Saturday and Sunday nights, of 12-year-old black boys who asked to sleep in bed with their parents because they were afraid. If black youth in America can’t rely on the police, the law, or their own neighborhood for protection — where can they go?

This is one of those painful moments which reveal an utterly segregated society, in reality and perception alike. White people have almost no idea of what black people are thinking and feeling.

This is one of those painful moments which reveal an utterly segregated society, in reality and perception alike. White people have almost no idea of what black people are thinking and feeling — even the parents of their children’s friends from school or sports teams who are black. Trust me: most white people over this past weekend, whether conservatives or liberals, had almost no idea of what was happening in virtually every black family in America.

Finally, there is a religious message here for all Christians. If there ever was a time that demonstrated why racially and culturally diverse congregations are needed — that time is now. The body of Christ is meant, instructed, and commanded by Christ to be racially inclusive. If white Christians stay in our mostly-white churches and talk mostly to each other we will never understand how our black brothers and sisters are feeling after a terrible weekend like this one. It was the conversation of every black church in America on this Sunday, but very few white Christians heard that discussion or felt that pain.

White Christians cannot and must not leave the sole responsibility of telling the truth about America, how it has failed Trayvon Martin and so many black Americans, solely to their African American brothers and sisters in Christ. It’s time for white Christians to listen to their black brothers and sisters, to learn their stories, and to speak out for racial justice and reconciliation. The country needs multi-racial communities of faith to show us how to live together.

Sign up here to hear more from Jim Wallis and Sojourners on this issue.

Jim Wallis, CEO of Sojourners, is a bestselling author, public theologian, speaker, and international commentator on ethics and public life. He recently served on the President’s Advisory Council on Faith-based and Neighborhood Partnerships and currently serves as the chair of the Global Agenda Council on Faith for the World Economic Forum.

His forthcoming book, On God's Side: What Religion Forgets and Politics Hasn’t Learned About Serving the Common Good, is now available.