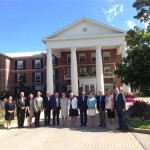 from BC Government and Service Employees’ Union

VANCOUVER. July 29, 2013 — The Canadian Premiers’ endorsement of an Aboriginal delegation’s call for a federal enquiry into missing aboriginal women represents a growing consensus among Canadians on the issue, says the BC Government and Service Employees’ Union (BCGEU/NUPGE).

“The Premiers’ statement provides a welcome new voice in the campaign to seek justice for these missing and murdered women,” said BCGEU President Darryl Walker. “Today we renew our call for the federal government to heed the growing chorus of Canadian voices and go forward with a national enquiry.”

The BCGEU/NUPGE has supported the initiative for the past seven years, and has been working with Aboriginal organizations for more than a decade to advocate for a national enquiry. However, the federal Conservative government has so far dismissed calls for an enquiry, saying that it has taken steps to improve the justice system.

Canada’s Premiers issued their statement of support on July 25 after meeting with an Aboriginal People’s delegation, including representation from the Native Women’s Association of Canada, the Assembly of First Nations, the Metis National Council, the Congress of Aboriginal Peoples, and the Inuit Tapiriit Kanatami.

The delegation presented a report that focuses on six key priorities, including:

About National Union of Public and General Employees

The National Union of Public and General Employees (NUPGE) is one of Canada's largest labour organizations with over 340,000 members. Our mission is to improve the lives of working families and to build a stronger Canada by ensuring our common wealth is used for the common good.