Pact would limit shipments to trouble spots like Syria, but Baird cites long gun registry for not signing.

OTTAWA, June 3, 2013 (Straight Goods News) ­– Sixty-one nations signed the UN Arms Trade Treaty in New York today to stop the illegal sale and distribution of arms fueling international conflicts and gang violence, but the Harper government insisted Canada not be one of them.

Argentina, the UK, Australia and other allies took time to celebrate as they signed, but Canada sat the party out. NDP foreign affairs critic Paul Dewar asked why today in Question Period.

"This is about the regulation of global trade in weapons. It is not about domestic use. The minister has had two months to figure this out. The question is, why does he not just sign? It is time to sign this accord. Every year, half a million people die because of the illegal trade in arms. Why is the government failing to join the rest of the world in limiting the arms that go to some of the hottest conflicts in the world? In fact, right now, when we are talking about Syria, we are talking about arms going to Syria. It is time to stop that. Sign the deal now," said Dewar.

Foreign affairs minister John Baird, today's stand-in for the Prime Minister, responded, saying,"We have very strong domestic regulations with respect to the export of both arms and munitions. What we do not want to see is the NDP and their friends in the Liberal Party try to bring in through the back door a long-gun registry that would only hurt law-abiding sportsmen and only hurt law-abiding hunters and farmers. This is what the Liberals and the NDP want to do in the next election and they can be assured we will not let them get away with it." 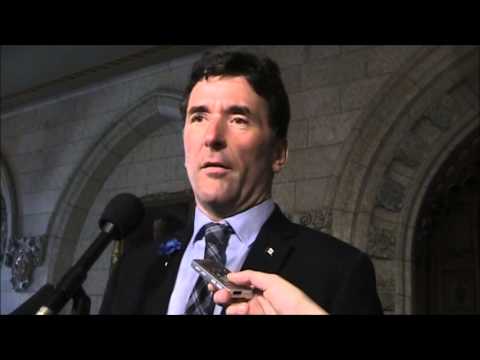 "This has nothing to do with the long gun," Dewar told reporters later. "This is about people in places like the Congo. This is actually about preventing Syria. This is about what happened in Sudan and this Minister of Foreign Affairs tries to make this a domestic issue, tries to make it sound as if this has got something to do with long-gun registry. It was a very poor display of our Minister of Foreign Affairs on a very serious subject. And he should not only apologize but he should get up and explain what the hell was he thinking, you know, when we have something as serious as this."

The treaty could also reduce the crime rate here in Canada by slowing the flow of illegal firearms, Dewar said, predicting it could slow the rate of gang violence even in Baird’s own riding of Ottawa-West Nepean, where several gang-related shooting deaths have occurred recently.