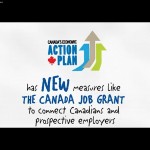 from the Mowat Centre and Caledon Institute of Social Policy

New research from the Mowat Centre at the University of Toronto and the Caledon Institute of Social Policy finds that the new federal Canada Job Grant federal employment training program will halt progress made in job training over the past two decades. It will probably deliver worse results at higher costs than the existing federal-provincial Labour Market Agreements.

The Canada Job Grant would provide cash for unemployed or underemployed Canadians to receive job training sponsored by employers.

“The program will likely deliver inferior results at higher costs compared to the programs under the current Labour Market Agreements.”

The $900 million program would pay up to $15,000 per trainee, with the federal government paying one-third, provided that the sponsoring employer and the worker's provincial government contributed matching funds.

Ottawa’s costs for the new program would be financed by cutting $300 million annually out of federal funding now paid to the provinces and territories under the Labour Market Agreements. These agreements fund training for unemployed Canadians not eligible for Employment Insurance.

“The program will likely deliver inferior results at higher costs compared to the programs under the current Labour Market Agreements. And perhaps most troubling is the fact that there is little evidence to suggest that the Canada Job Grant would help train workers to fill positions where there are actual job shortages,” he says.

Mowat researcher Noah Zon adds that one of the main problems with the program is the way the federal government is attempting to unilaterally impose it on the provinces.

"Without any published evidence, warning, or consultation with provinces, the federal government is abandoning two decades of momentum toward intergovernmental cooperation on skills training,” he says.

Matthew Mendelsohn, Director of the Mowat Centre, says that there is still a window of opportunity.

“The good news here is that there is a shared interest among governments, businesses and the non-profit sector in helping workers get the skills to succeed. We have a rare opportunity for a national discussion on Canada’s long-term human capital needs,” he says.

“The federal government should shelve the idea for a Canada Jobs Grant and begin a real conversation on a national skills training strategy.”