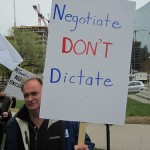 Parents have sided with the teachers.

It is becoming increasingly clear that the Ontario Liberal government cannot successfully negotiate with the province’s teachers and education workers, prorogue the legislature, and run a leadership contest simultaneously. They end up looking like complete fools. The Education Minister Laurel Broten, keeps issuing these idle threats that she is just thinking of perhaps considering, possibly using her powers under Bill 115 to perhaps, order some teacher sanctions off the table if maybe students’ safety is at risk. Her boss, the alleged Premier of the province seems to be in the witness protection program in a secure location, leaving Broten to fight a lonely rearguard action on her own. Not to mix metaphors but she looks increasingly like the tail gunner on a Lancaster bomber, still spitting fire unaware that the pilot is dead, one wing has come off the plane and most of the rest of the crew have already opened their parachutes.

The students’ safety is not at risk even a little bit but the principals and vice principals will be run ragged covering the cafeteria bun fights and hallway miscreants so naturally they hate the idea and yell “student safety… the sky is falling” and pull the fire alarm at the first hint that they will have to leave their offices or actually stay in the school all day.

The threat by some boards to “lock out” the teachers, their only real legal option, provokes the teachers to spill their coffee laughing, because it is such an idle threat. All of a sudden, there are zero students getting an education, running amok in the local mall because the board locked the teachers out — Pleeeeeze, it is not going to happen, not even in one board. Trustees are well aware the entire problem is now “on them” if they choose ‘lock out’.

The three leading Liberal leadership candidates, all former education ministers BTW, Kennedy, Wynne and Pupatello, do not want this fight with the teachers and the public sector. They understand it is killing the Liberal Party. Kennedy is already openly contradicting Broten and Wynne will follow if it seems Kennedy is getting any traction. Every time Broten opens her mouth, she perpetuates a fight that the next Premier does not want. Her total failure to get a deal simply prolongs the Liberal agony. The teachers are not losing even one pay check.

The teachers, the education workers and the general public are laughing at her already and when they start laughing all of your credibility and authority are gone. The curtain has been pulled back and the Wizard of Oz is just a man (or in this case, a woman). If she did muster up the courage to declare a certain sanction out of bounds, she only enrages the teachers further and shifts them towards cancelling all extra-curricular activities instead. The government was warned way ahead of this dispute that teachers had the ability to make Liberals' life one unending root canal without losing one cent of income in the process.

What is worse for the Liberals is that their rank opportunism of trying to actually gain popularity with teacher bashing has blown up in their faces.

The majority of the population, including the parents, have sided with the teachers and the 40 percent minority that applauds the government tough line is composed 90 percent of Tories. This leaves about five percent of the voters that both like the government’s direction and might vote Liberal. The Premier himself, the last time he was seen or heard from, has indicated that he “regrets” his hard line with the teachers. This line we will see again in the court case on whether he even had the right to impose deals on the public sector.

The right wing media (Sun Media, National Post, Ottawa Citizen, Globe and Mail…) loves to harrumph “THIS time the teachers have gone too far. THIS time the public will turn on them…blah, blah, blah.” Guess again. The public (all those soccer moms) just wants peace. They will punish the institution that provokes the war by throwing the first punch. The Liberals look like the group that started the fight so they are the ones that will suffer politically. Here is a piece of news for the Liberals and the media. The teachers are not the ones facing an election in the spring but the Liberals are. The teachers are totally prepared to face Tim Hudak as Premier if it comes to that. He does not scare them even a little bit because they have seen this movie before. They eventually defeated Harris/Eves because the Tories overplayed their hand. The teachers are totally prepared to go ‘all in’ on the NDP if the Liberals don’t come to their senses.

I just hope, and assume that the teachers and education workers understand that they have all the cards. The Liberals are the weaker party in this negotiation and need a deal desperately. The teachers should be playing very hard to get and dragging this thing out to make the Liberals pay dearly for the temerity of ever even raising this topic.

Every party in Ontario needs to learn that when they make the choice of severe austerity and extracting billions of dollars of value from the public sector to solve their fiscal problems, they beg the existential question with regards to their own party.

“… Those who cannot remember the past are condemned to repeat it…” George Santayana, from The Life of Reason.