Treasury Board Secretary Tony Clement called sick leave policies for federal public servants "unsustainable" and "a dinosaur" and touted the government's intention to replace them with a system offering short-term disability leave service instead of leave. Clement said effort to curb what he claimed to be " unwarranted absenteeism" in comparison with the private sector. 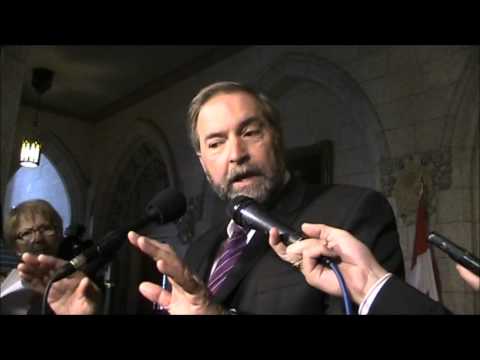 Robyn Benson, National President of the Public Service Alliance of Canada, says Clement's messages are misleading. "The government hasn’t been transparent with its data, and the data we do have simply doesn’t back up their claims," she said, in a statement.

"For example, it’s misleading to call unused sick leave a 5 billion dollar liability. If our members use banked sick leave, it’s because they are very sick. And if they don’t use it, they lose it. They certainly can’t cash it out or use it to retire early. It’s also misleading to compare public and private sector sick leave. Many private sector workers get no sick leave. When they’re off sick, that’s not counted as a sick day."

“There’s an undercurrent ­ there’s a hidden subtext to what Tony Clement is doing which is pandering to his Reform Party base by attacking civil servants, forgetting all the while that they’re the ones who provide public services,” said Tom Mulcair.

NDP leader Tom Mulcair was not impressed. "When they’re pandering to some parts of their base, the Conservatives have an unfortunate tendency to attack civil servants. It’s old-time images and prejudices that they’re pandering to. We tend to forget that the civil services that we enjoy as Canadians are provided by civil servants. So the last thing they should be doing is attacking the people who provide those services because it’s an important question for the future," Mulcair told reporters.

"When you attack them constantly, when you make their working life miserable, you wind up with people who are burning out, who are having all sorts of problems and who do have a higher absentee level than in other areas.  They’re [the government] paying the price of their own indifference to the whole problem. They’ve created the problem," he said.

"There’s an undercurrent ­ there’s a hidden subtext to what Tony Clement is doing which is pandering to his Reform Party base by attacking civil servants, forgetting all the while that they’re the ones who provide public services," he added.